There is a joy in horror. 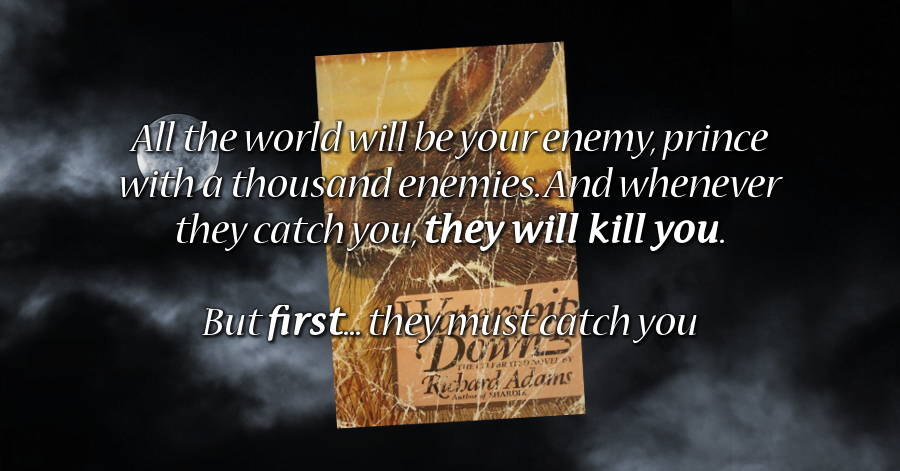 There’s a truth to it that horror is a space that draws the marginalised. There are a variety of reasons for it, many socioeconomic, many infrastructural, and almost none that actually have anything to do with demonic forces or actual witches, no matter what Alex Jones types want you to think. There’s a not-insubstantial body of people for whom horror in fiction and media directly relates to and catalogues horror in their own lives.

There’s this book, Watership Down, which is known primarily as being an adventure story about bunnies that is also really dark and violent. There’s a lot to the canon of it – the author, Richard Adams (who passed away only a few years ago) made it as a personal project for his family and as with all projects of its ilk, it just kept growing and sprawling. My own experience with Watership Down was focused much more on a beautiful storybook of the bunny mythology than the main narrative. This is where I learned the term for ‘a lot’ that bunnies used (u hrair), and thought about what it really meant to convey meaning.

In these myths, there is the declaration at the root of the bunny view of the world, an oath from (basically) god to the bunny that represents all bunnies, a species that is, broadly speaking, always prey to everyone: All the world will be your enemy, Prince with a thousand enemies. And whenever they catch you, they will kill you.

But first, they must catch you.

I find this enormously comforting.

I like to think that one of the things about this motif that resonates with me is because I have a feeling of power in the idea of just surviving one more day, because that’s all we ever really get. We’re not guaranteed anything, we don’t get a guarantee of tomorrow, and one day the party’s going to end, or rather, one day, someone’s going to tap me on the shoulder and say ‘hey, it’s time to go and everyone else gets to keep having fun.‘ And that’s going to suck when it happens. Anything I do with my time and my life is throwing ideas and effort into the future with the hope that some of it connects to people and makes people happy is doing so before the many forms of the void reach down and end me, not just by being gone but by being forgotten, and then having even the things that outlast my memory being forgotten. One day, something is going to end the last thing that’s left of me.

But first, it has to catch me.