I love building characters in City of Heroes.

This is going to be mechanical, by the way, not narrative – I have lots of views about how to build a character in a shared roleplaying space. This is about how I prioritise stats when I’m building characters in this game.

For those not familiar, City of Heroes characters get a number of abilities that let you do things, and then they get ways to improve those things. This is typically divided into ‘powers’ and ‘slots.’ Slots can hold things that improve things the power do – accuracy, damage, the time it takes to recharge, the duration of effects like stuns or holds – and so powers you want to do lots of things, you’ll give them lots of slots. You can’t just fill them with the same effect because there’s diminishing returns after the first two, which means powers tend to get a little bit of one thing, a little bit of another.

Now, that’s probably all that you’re going to get out of this unless you’ve played the game, because this is a big, complex system. If you really have no idea about it, the rest of what’s coming is going to be gibberish, so I’ve put the useful conclusion to all that here up front:

What we can see then is that – perhaps accidentally – this great big confusing mess of a game, that when you have a lot of systems at work, even if you have a fairly simple, linear method of progression (defeating baddies), there’s still a lot you can do to make the individual choices of a player expressive. Players can build towards their priorities.

Now, you might not be making an MMO, but you might be making a tabletop RPG. If you’re building in the modded space of games like Pathfinder or 13th Age, you’re in a similar space, and that’s when the time comes to look at your own creative efforts rather than necessary in terms of perfect balance, as instead about competing balance. See if you’re presenting players with enough choices that character building is full of interesting choices.

Also, if there’s something players should just have, then just… give it to them.

Now, if you want to keep going, here we go:

First of all, the tool I use to compile my builds and do all the tedious math while I’m working on them is the Mids Reborn Hero Designer. This is a lot like tuning a clock, in that you may get some large parts in place, and some things have to fit in the right space, but maybe you find something needs to shift this way or that, and there are builds that are made to handle exemplaring down to important levels, and there are builds that want to be really active and involve a lot of paying attention to what you’re doing.

Here’s the thing: Character building in City of Heroes are both extremely powerful and extremely flexible. There is not a ‘best way’ to make things because there are enough dials going on, and that means when you start building for how you want to feel, you start building something that’s your own thing rather than someone else’s thing.

For an example, let’s look at a defender of mine, Moonheart. And my desire to tell you all about him is sitting there, but I’m going to spare you this time (I can do that next time if you want). 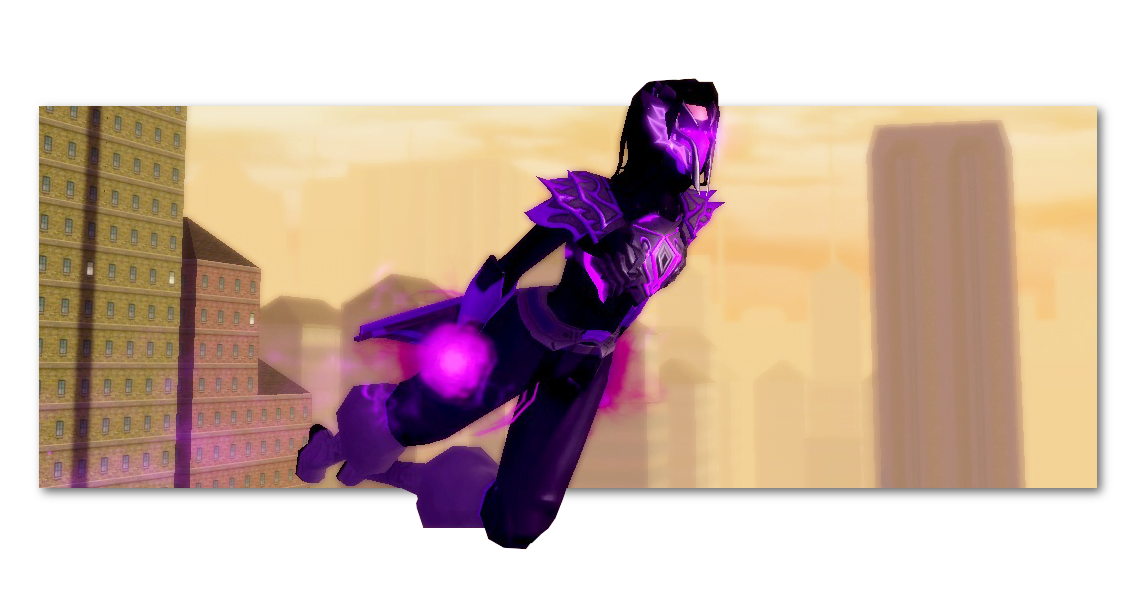 Okay, so Moonheart is a magical boy, and he’s a Pain Domination/Dark Blast defender. Because he’s a magical boy, I kind of saw him ‘posing’ in space in the air, so he should probably fly. I want his powers to look linked together, so I want them to have a matching aesthetic and colours.

Okay, so what builds out of that?

First things first, travel power: If he’s meant to fly, that means I’m taking Mystic Flight or the Flight Pool. Mystic Flight gives me access to Rune of Protection, which is great for overcoming mezzes, and the Flying pool gives me access to the two-power pick pair of Hover and Afterburner, which both can hold a Luck of the Gambler without any slots spent.

Second, if I want the powers to match up well, that means my Epic power pool choice probably can’t be Power Mastery. That means no Power Build Up, which means there’s no real reason to spend time on powers that are good with Power Build Up. Since Pain doesn’t benefit much from Power Build Up, that’s that out.

I didn’t want to spend tons of money or wait a long time for his build as well – so I limited myself to one PVP set and one set of ATOs.

See what I’m doing here? I’m knocking out things I don’t want, I’m limiting my focus so I can pay attention to what matters. For this power combination, there are two powers in the primary I don’t want at all (Soothe and Share Pain), and in the secondary, I don’t know how many attacks I want. What I do know is that this build will probably have a lot of recharge – maybe as much as 70% (which is as much as hasten, without hasten). That means that I don’t need a lot of attacks, I just want my two best attacks and a filler attack. For dark blast, those three best attacks are the fast snipe Moonbeam and Gloom, and then Dark Blast is a filler attack.

Okay, that means of my power choices, that core gives me a lot of room. I can probably afford to jam some other effects on top of that. If I go for a defensive Ancillary like Scorpion mastery, that means layering defense over my passive resistance powers from Pain Domination. On the other hand, if I don’t go for a defense power, I’ll probably be able to hit the resistance cap, at least for one or two damage types, and that gives the character a great strength.

I tend to build for goals; I set up a targets for the things I want, build the character to have that, then see if I can maintain that number while I go for other things. Typically, these days that means that characters shoot for high recharge (to get to use my best powers more often), a defense, then resistances. This can change wildly though -like I said, if I find that two powers I have synergise in a particular way, it changes my priorities. A good example is in Time support characters, the power Power Boost means that suddenly you don’t need to try for defense at all, getting huge amount sof it from those two powers. 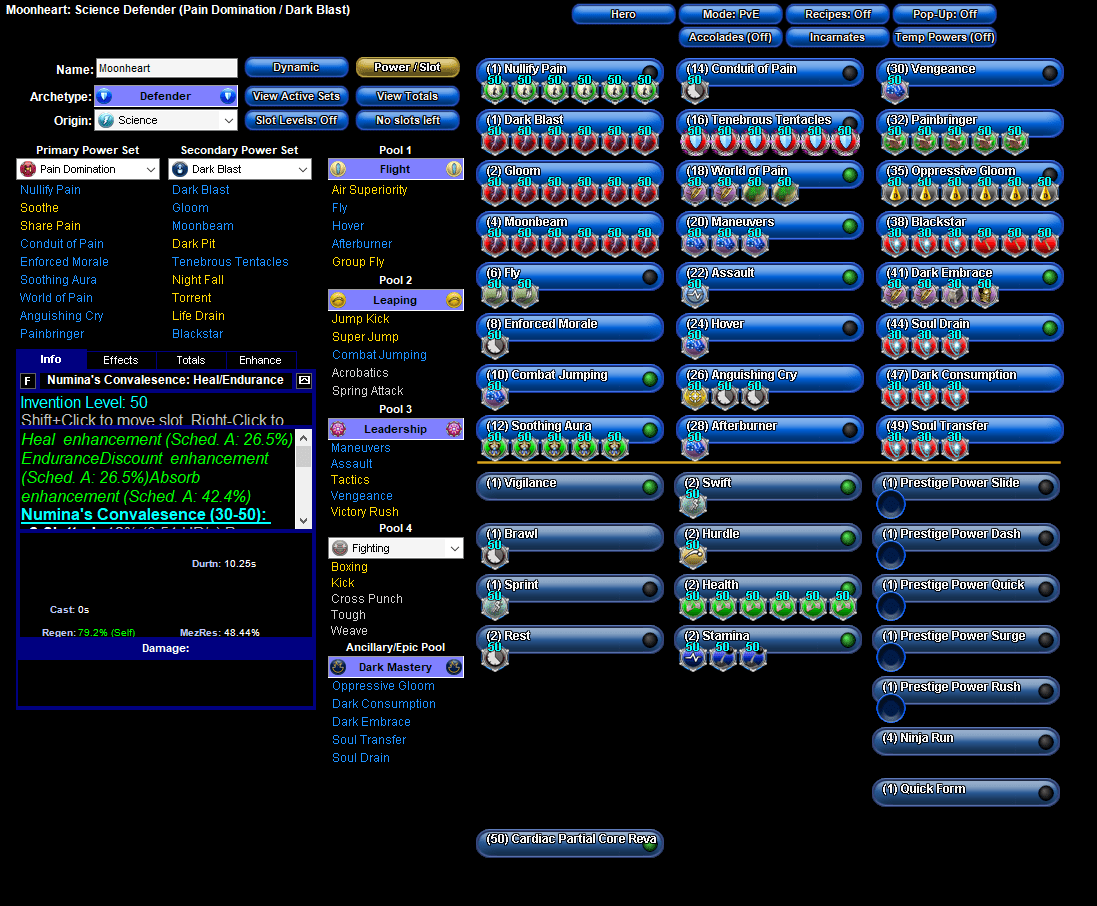 In this case, what I shot for is ranged defense to make mezzes less of a problem, high resistances to smashing and lethal, and some recharge. Then, I knew I’d probably have some easy ways to pick up a little extra damage through powers like Assault.

This means checking out Tough and Weave, and seeing how that works with my set bonuses. Alternatively, though, I could check out Leadership, which I did. Leadership asks for fewer power choices, fewer slots and all the powers are good, while Fighting gives me Kick, which isn’t… that great. Finally, I am extraordinarily lazy about endurance management. If I can make a build so it can ignore its endurance bar, then I will almost always do so. That pulls me, at the Incarnate level, towards Cardiac and Agility. Cardiac gives the resistance nudge I wanted, the endurance discount I can use, and just like that, the build’s tidied up.

And all those decisions result in how I pick my powers. I went for small incidental bonuses, enough recharge to have certain powers permanently, and some interesting configurations to get ranged and energy defenses.

If you’re still here and want to check this build out, here’s a link.