Years ago, as one of my research projects, and to show off a bit, I talked about Australian money, because Australian money, unlike most other cultures’ money, is good, or at least, better than yours, or, most importantly, better than America’s, which is really bad. At the time I had the fanciful idea of maybe examining a bunch of different culture’s money, but mostly they all repeat the same basic-ass mistakes as the American money, which I think is possibly because American money is the template a lot of other countries use (why).

British money needs a little bit more space, but less than it should. 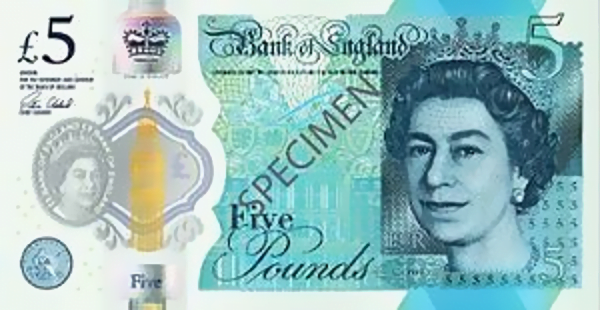 First of all, we have the wasted face. The bad face. The terrible face.

This is not a bad face as far as money design goes, but there are four pound notes, and on all four, one of the faces is reserved for a slightly differently colour coded flattery shot Her Maj, The Queeny.

Now, setting aside the fact that if you believe in something like fairness, the idea that one woman could, by accident of birth, wind up wealthy in a way that not even conventional visions of money could buy, and festooned with a level of cultural importance that no actual human can possibly justify, the Queen is just a Bad Look (a Bad Look we copy on our $5), that they dedicate four of the eight note faces they have to this same design multiplies the badness. Normally I’d give the money credit for including a woman on one of the faces, because, you know, baby steps compared to places like America, but c’mon, maybe pick a woman who did something worth celebrating?

Oh well, at least it’s not like America, celebrating a ferociously adamant and violent racist. 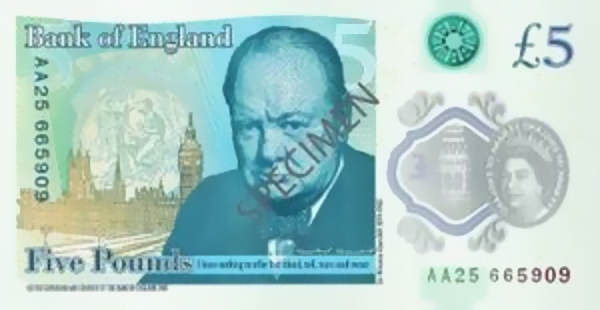 Anyway, here’s Winston Churchill, and if you want to know why this isn’t good, have you considered asking Anyone Indian. Oh, but he fought the Nazis, yes, and we can say fighting the Nazis is pretty good stuff, but perhaps one could find some way to fight Nazis while also not perpetuating genocide against a people on land you stole. Like, when you’re doing things like pushing people out of their homes and starving them in the name of enriching your own people and benefitting their ‘living space’ you might be objecting to the Nazis on more an issue of team colours.

Also, Churchill died in 1965, which means, Queen aside, he represents the most modern thing on this money, which I think is a subtle way the Royal Mint admits ‘well, we haven’t really gotten shit done since 1945.’ 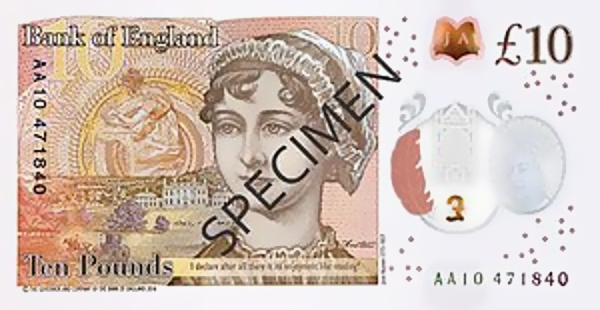 Jane Austen takes the obverse of the tenner, which I’d normally say is a good thing, because Jane Austen is culturally significant for something other than being elected to bomb the shit out of foreigners, but her presence on this note brings up another miserable point about the culture that spawned these cursed wads of exchange scrip, and that is, that the British people who do care about their money seem to (CW on the link, death threats and rape threats) be some of the worst kinds of garbage humans. This was an unequivocally good move, in that it put an important British woman on a piece of public art in a space that had historically denied them for no good bloody reason and in response, enough people to ruin someone’s day decided they’d dedicate time and energy to shitting into a woman’s mailbox.

If you ever wonder if I care about money too much, I want you to understand that I get mad at the money, I don’t create twitter egg accounts to go talk about knifing women in the street over it. 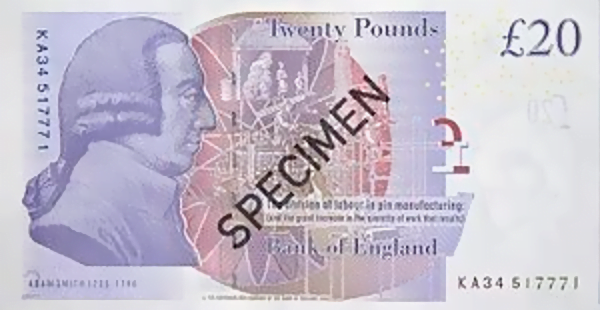 And speaking of unreasonable violence courtesy of money, here’s Adam Smith, author of Wealth of Nations and one of the first modern economists. Quite important. Quite fancy. Look at that wiggy hair. Also, crucially, not British, but in grand British tradition, claimed as British as long as that makes them look good. He’s like Andy Murray whenever he’s winning.

Also, I’ve seen too many liberterians using this guy as their twitter avatar to think of this note as doing anything as much as suggesting that if children could sell themselves into slavery, why shouldn’t we let them? 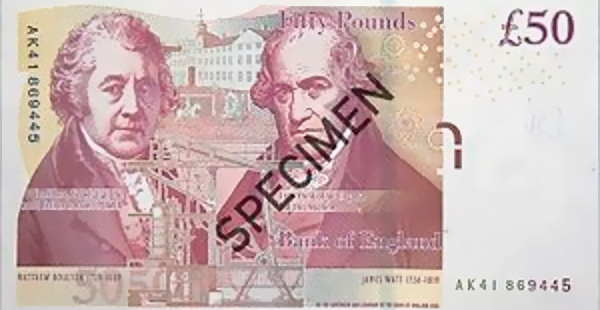 Finally, the fifty pound note, which represents the artwork of Boulton and Watt, who were yes, responsible for the very cool Steam Engine (which had already been invented) and helped to kickstart the industrial revolution (an event whose unrestricted capitalist excess, in part enabled by Adam Smith, is literally killing the planet).

The civic art presented here at least represents a reasonably interesting spread of topics. There’s art of scientists, art of political leaders, art of an artist and an art of an academic. There are two artworks of women, which means women are only outnumbered two to one, which is so much better than the American money.

But at the same time, there’s a sort of sad, pathetic decline to the whole thing, isn’t it? This is England; a place whose history stopped in 1945 and since then has been embarassedly treading water. The glory of empire shining from an ever-retreating past, somehow nostalgic for a thing that a reasonable people would never want to be associated with ever again.