Here’s a puzzle I’ve been cracking at for a little while. 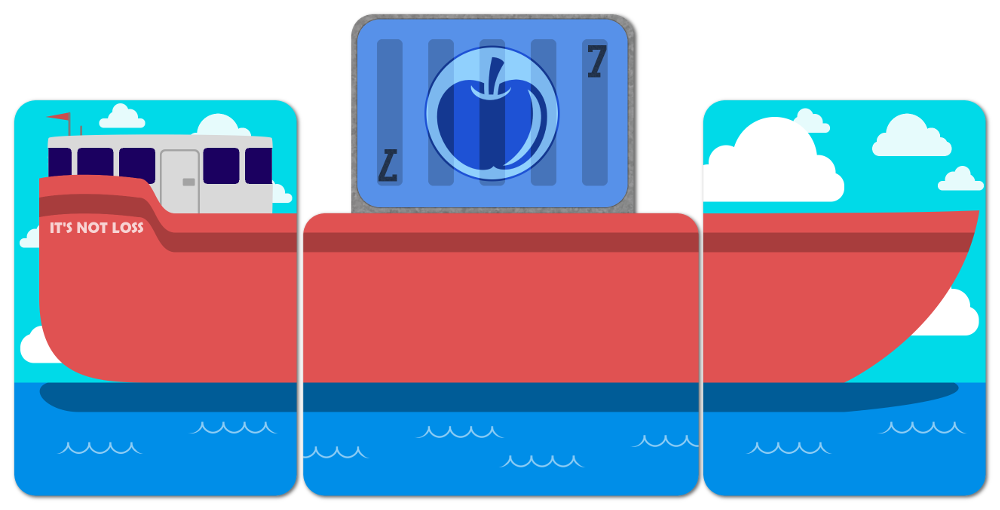 I’m working on this game about shipping lanes and boats, and tonight I spent some time working through what I think of as the game anatomy – working out how many spaces in my deck of cards I have for each particular subsystem.

For the game tenatively called BOAT GAME because I am sick of my development names sticking through to the end and resulting in names I feel silly about, I have the following things I need in the deck:

I want this game to be a ‘big’ game, which means that it’ll go in one of our 120 card boxes. The market deck is going to be the ‘biggest’ section, because I want a fairly large variety of cards there. So I’m going to work out what all the other cards make up, then every other card in the box can be a Market Card. In essence, I’m trying to work out how much space I need for cards that aren’t Market cards.

First things first, I work out how many of these cards have an absolutely fixed number. There’s just the map cards in this one, because you’re travelling between two ports. The boat fronts and ends need to exist 1 per player, and the boat order cards probably need to have 1 per player too. This gives us a common enough variable for ‘number of players’, which I’ll call p. So if the boat fronts are p, and the order cards are p and the boat ends are p, we have 3p as a base.

How many middles do I need? I need at least 1 middle for each player, and I may want there to be enough for players to upgrade their boats a few times – maybe one time, maybe two, maybe three. That means that I now have a number of cards that relate to p – like I need at least p middle cards, and maybe I’ll want 2p or 3p. We can call that middle number range m. So if we only want boats to have 1 middle, m is 1, if we want them to have 3, m is 3 and so on.

With that in mind, we now have a pair of numbers we can turn up or down. I was originally imagining that the player count could be 4, and I sort of imagined a ‘big’ ship might have three slots in it. So p =4, and m=3. That gives us a value like:

94 is a fairly large market deck, but I also want to let my Patreon Patrons name some of the boats. If there are only 4 boats, that’s only 4 names. Which is fine, but I can do more. Still, 3 sections of boat seems okay.

Now rather than do that algebra again, I stuffed it into an Excel sheet.

Here’s how that earlier breakdown looks: 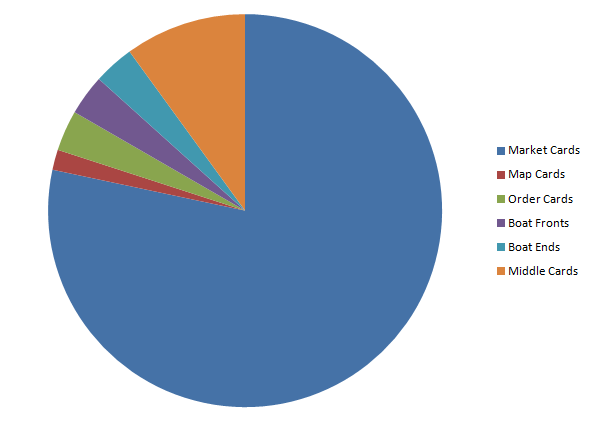 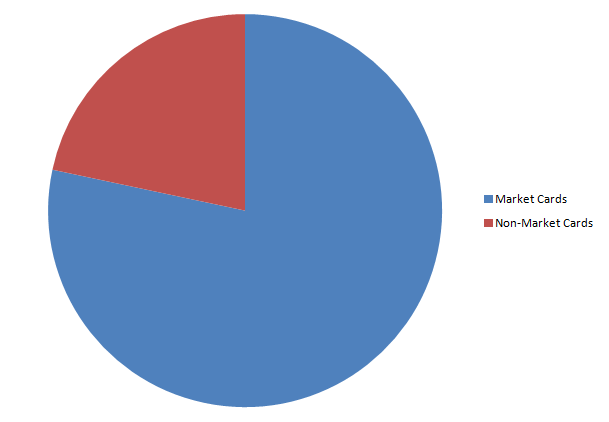 That’s not much of the deck, really, and gives us a huge chunk of the deck to be the market. That’s kind of nice, but also does limit us to a smaller number of players. How much do we lose when we give up space to those remaining 2 players? 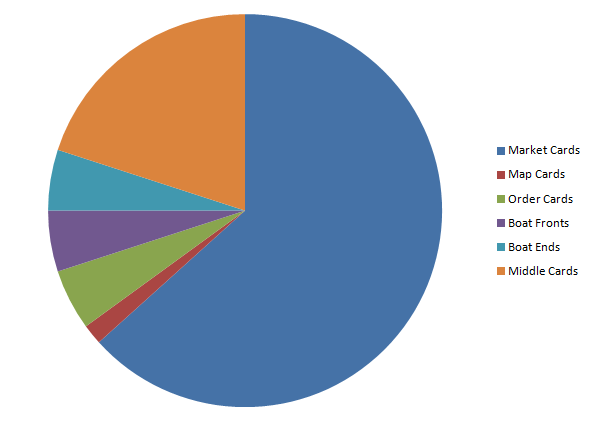 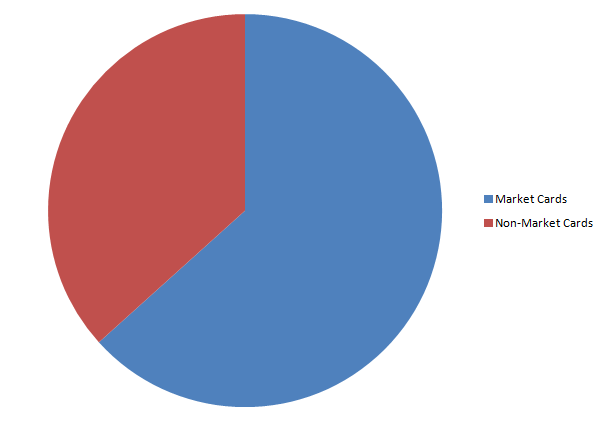 Notice how now, with 6 players, the middle cards make up almost as much space as the original non-market cards?

Anyway, I think I’ll settle somewhere in the middle. With m it’s worth remembering that this isn’t to say players get ‘at most, m upgrade cards’ – though that’s an idea! The original idea is that there’s a stack of them and players can buy them to upgrade their boat. If everyone is upgrading their boats at roughly the same rate, they should all run out at the same rate, which means the question of how many there are is kind of assuming player behaviour.

I was originally thinking of making the middle cards into ‘action’ cards where you could buy them for their action or use them to upgrade your boat. That’s kind of cool, but I don’t know if there’s enough interesting actions to make that worthwhile. Also, I think maybe I’d like to make it so players can’t buy lots of ‘cheap’ ship upgrades early on and just make big king hits on the marketplace.

On the other hand, as I write this I find myself wondering if instead, these upgrades should be part of a small deck each player gets at the start of the game, in ascending order of cost. Your first upgrade costs less than your second, and your last upgrade should cost the most.

These are just things I think about as I stake out design space.