Hey, here’s a thing I was working on in February. You may have seen it on twitter.

Here’s a cut link because this is going to show full images of cards and those things are loooong. Oh and pre-emptively, these cards have been munged by Twitter because I could not be hecked to re-export these progress shots.

First up, we have cards for the game that was developed as Hook, Line and Sinker. Cards are going to have names (so you can tell them apart), roles (so you can collect a set), text (so they have rules), a space for an icon (to help identify the card easily in your memory)… and a thing I forgot during this process. For now we’ll just go with these base three fields: A name, a set, and a mechanic. 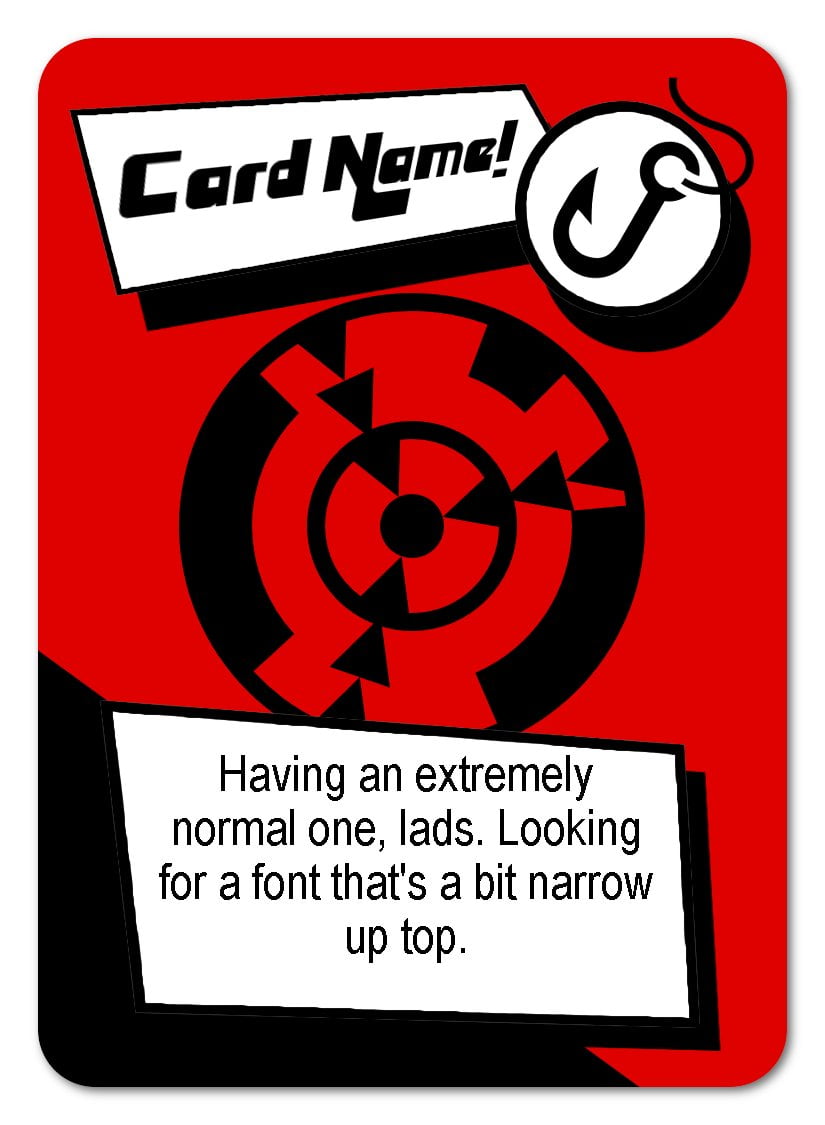 Okay, here’s the basic. Block out fields, put text in them. First few problems come up. First, the squared text in an unsquared box looks bad. I’m going to consider ways to solve that. One option is to make the box more square, another is to distort the text to match the box (tricky), and another option is to make the text in the font box stylised.

There is some space issue to worry about. Those shadows want to be distinct and stark, so you can see them, and that means the outline for the text boxes also want to be thick. That means that while I can use the bleed line for those shadows, I don’t want to push into them too much. I think that’ll make the card look a bit more lopsided than I want it to look. 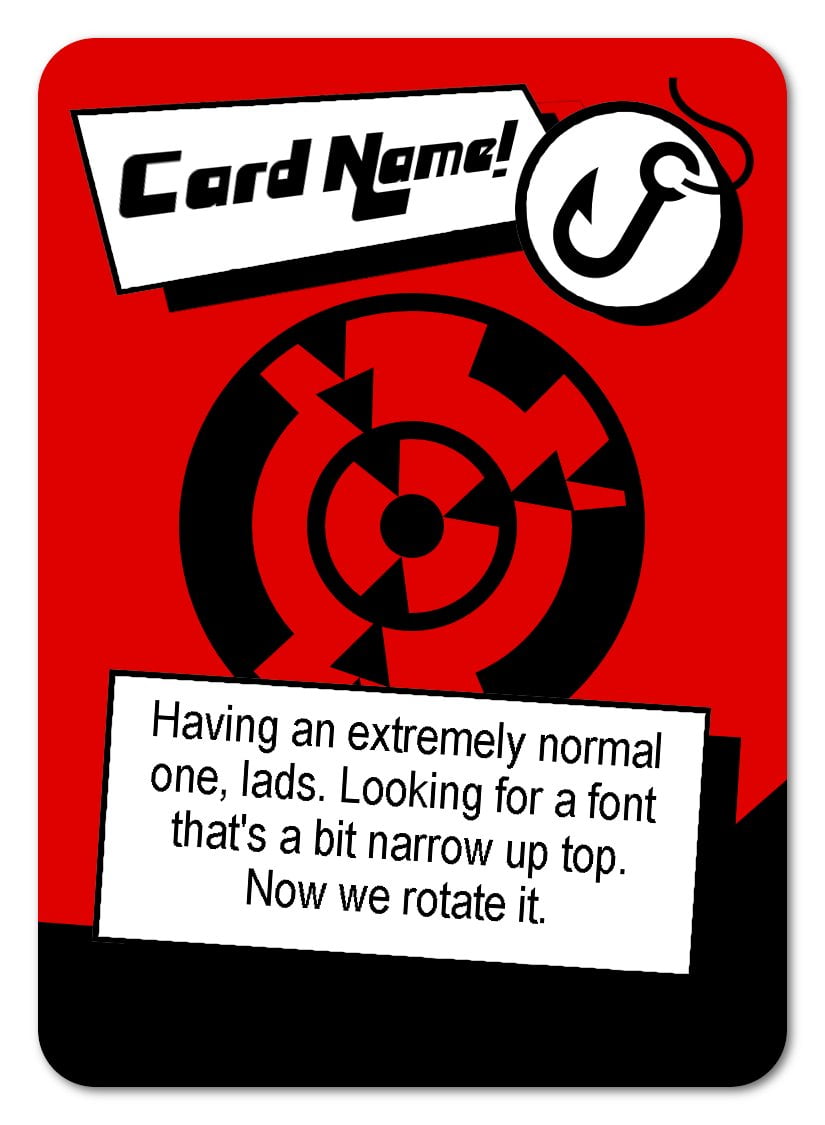 This time, I made a second file to put all the text in, make a standardised text size, then port it back in as an image into the main. This is pretty decent as an effect – you lose some of that skewiff, wildness, but you do get more readable text.

Another option is to customise that text box entirely every time, but with 18 cards that might be a pain in the ass.

I know it’s a bad idea now, but I wanted to test it anyway. 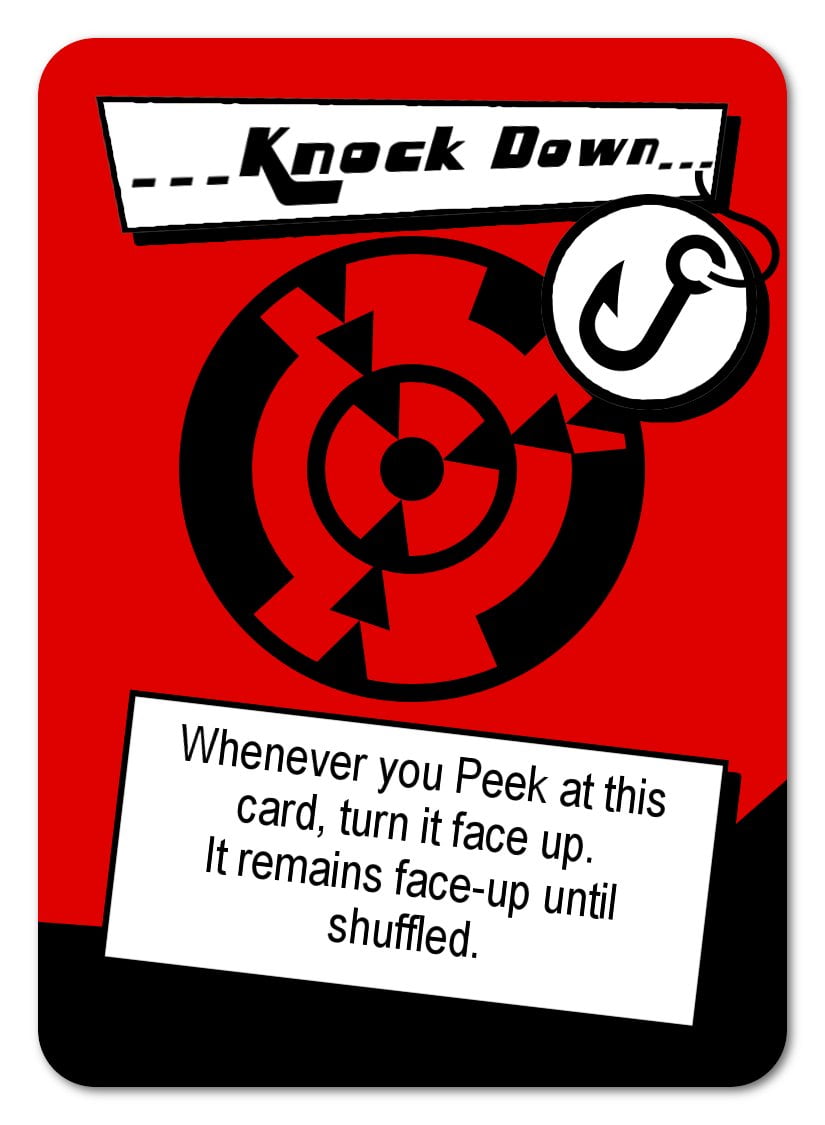 And now we have a third example. I don’t like how it makes the sides of the text look ‘open.’ Thanks to making this mock-up, I’m able to tell myself whether or not this is a good idea, and testing it and seeing the problems it presents (like look at all that space it leaves unused!) rather than thinking about whether or not they’ll be bad is a great way to get into the prototyping.

And now when I looked at the face at the end, there’s an additional tidbit of a problem: See, this is missing the value of the card! So, this face, with its chaotic sprawl, needs one more field, and it’s time to go back to work on them.