I don’t know if I’ve ever said it in so many words, but Bleach is a mess.

Hang on, I wrote about it on this blog, I can go back and check.

When you don’t have a sort of concluding paragraph, when you don’t have a point you were building to, though, there’s a certain freedom to it. I don’t think Tite really had a plan and if he did it didn’t matter because the author of Bleach, in a proper Barthes way, is dead, and that author had no idea where they were going.

Bleach being a mess is part of why Bleach fandom is much like Star Trek fandom, a process of deciding what parts of it you’re willing to, or interested in keeping, and then just letting the rest sit over in a pile that gently steams. It is a sweater made almost entirely of dropped threads.

Let me tell you about the most inexplicably dropped thread, the ship known as Dragon Princess: Orihime/Tatsuki. 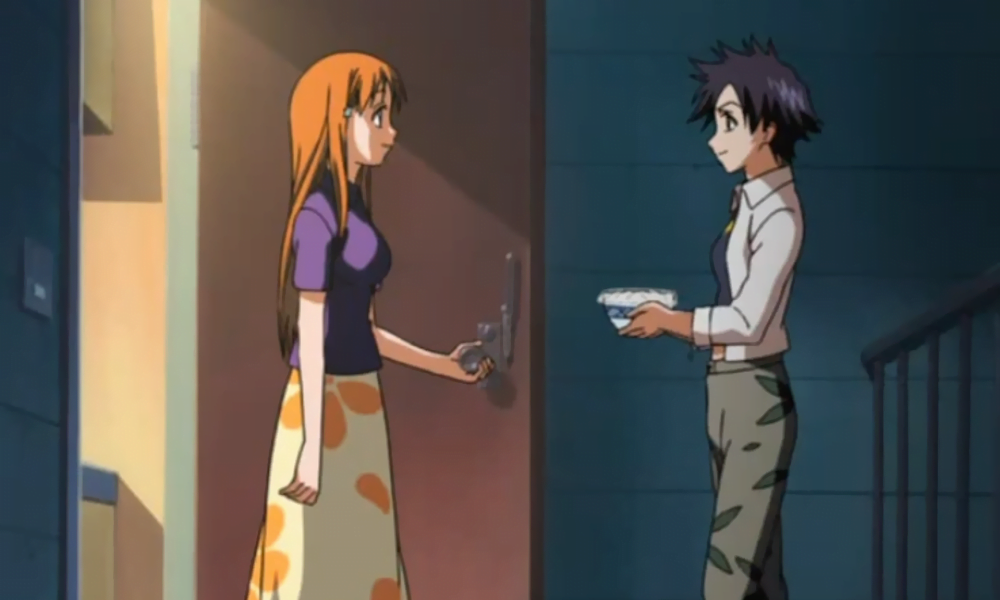 Player the first: Orihime Inoue. Orihime is introduced as a Karakura highschool girl (with a giant rack) who is sweet and popular despite being bullied in her earlier years for having red hair. That bullying stopped in recent years (probably in part due to the giant rack). In her introduction, you get to see that she’s nice but also pointedly weird.

Orihime is a charming space case who kind of starts out as ‘generically sweet.’ You do get some great insights into her mental habits – things like how her lunch is an entire loaf of bread and a single tin of fish. When asked what she sees herself doing in ten years time (which is, like, ten years ago now), Orihime shows a picture of herself as a death robot with missiles for boobs. 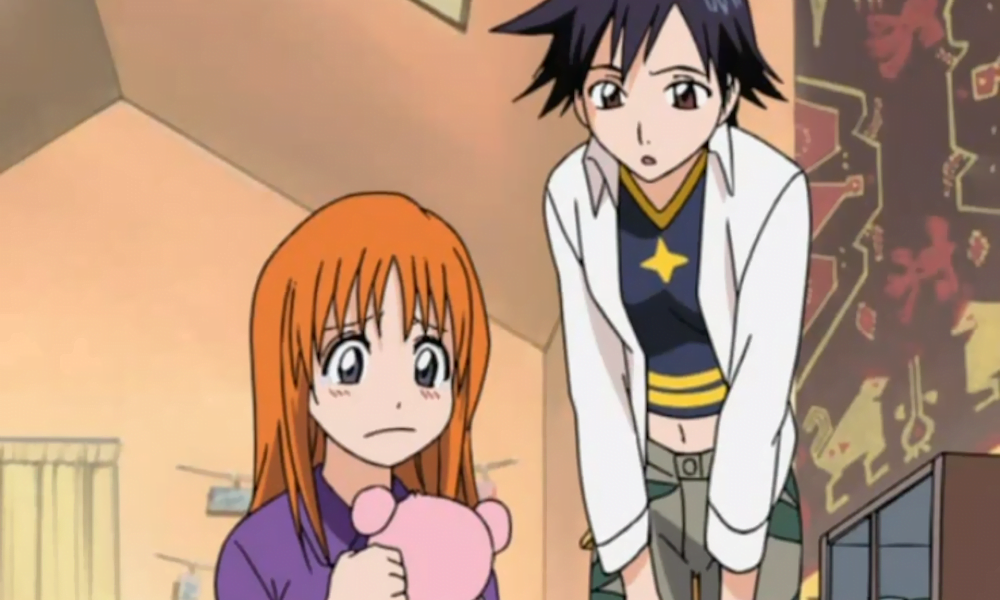 Orihime is one of the earliest introduced character, a girl in Ichigo’s orbit with just the most tragically awful backstory of any of the relative normie characters. Her father was a drunk and her mother was a sex worker (and it’s implied, therefore, unable to care for them). She had an older brother, Sora, and I do mean older: He was fifteen years her senior. When he turned eighteen, operating on the assumption their parents would do a bad job with a three year old, he took her and ran away. For nine years, Sora raised Orihime, then, three years before the start of the series, he just straight up died.

Sora then did stuff and hung around as a ghost and started to resent his little sister growing more connected to her friends than to his dead ghost but like, okay, whatever. This backstory is something that comes out in one early arc, and it’s the backstory of one of the Hollows, the kaiju ghosts that Ichigo used to spend the early episodes fighting. 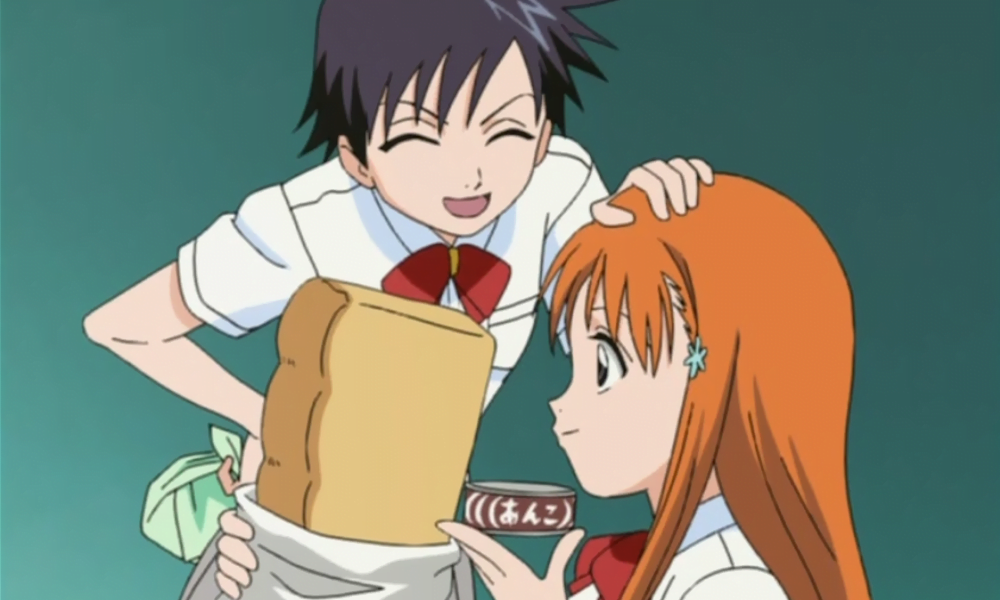 Then part two of this couple is Tatsuki Arisawa.

Tatsuki is introduced in the series in the cloud of students around Orihime, during that first period of Tite Kubo doing that thing he does, of showing off two dozen characters and seeing which ones stuck. Not all of them did, as you may notice by the fact that if I mention Mizuiro Kojima, even if you’re a Bleach fan you have to spend a moment going: Which one was he again?

Tatsuki is in Orihime’s class, and she’s kinda your basic package of ‘tomboy’ friend alongside girly girl. Tatsuki is into karate, into making friends, she’s brash and she’s willing to defend her naive friend against horndogs that she doesn’t realise are hitting on her. This role of blocking bullies targeting Orihime is something she’s been doing since they were young. Tatsuki dresses in pants and shirts rather than skirts and dresses when she’s out of class, and she aspires to be one of the strongest martial artists in the world – and she’s on her way!

Ultimately, Tatsuki is one of your standard, eye level students dealing with the variety of supernatural stuff around Karakura high. Whether it’s a supernatural medium coming to town or a serial killer’s ghost trying to avoid its final judgment, Tatsuki is someone who’s important enough we get to see her engage with the things around it, but not so important she gets to deal with it. In the first major ‘arc’ of the story, Tatsuki gets teased, repeatedly as being one of those people who’s got a thread connecting her to the supernatural world of the Shinigami, but doesn’t quite get there yet. 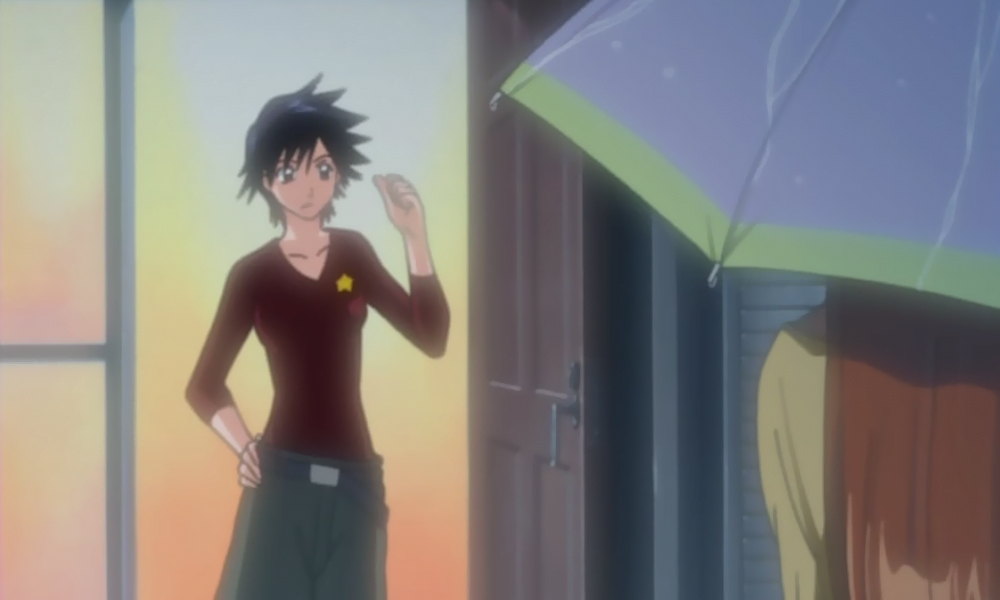 That gives you your basic dynamic right there. Orihime is a pretty femme with no drive and hidden depths. Tatsuki has more immediately obvious power, and has drive and focus to excel in a story that’s going to be about constantly pushing yourself onwards to newer and newer levels of power through nothing but a drive to excel. One of them is great at managing her own life and training regimen in a practical lived way, one of them is always looking for the wonder in the world and has a free-wheeling imagination.

They like each other a lot, show a lot of visible and clear affection, and they have lots of sweet chemistry with one another. Tatsuki can sense Orihime’s absence from reality itself, somehow, which is definitely a normal thing for ordinary karate girls to be able to do.

Now, you might want to get all ‘Korrasami is a Straight Ship’ on me here and point out that Tatsuki is a ‘surrogate man’ and that therefore, Orihime and her being interested in one another is just queerbaiting, or some such stuff, to which I say: I don’t care. 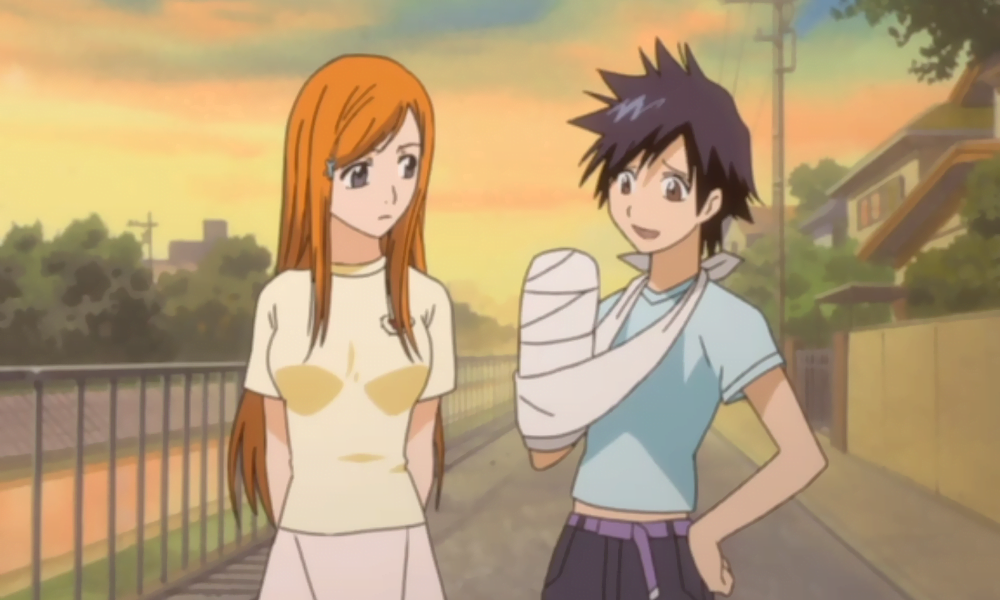 Look, there’s a reason you might not remember seeing Tatsuki in all the promotional art for Bleach, and it’s because she got to show up in the first season back in 2005 and never meaningfully had a presence in the story after that. The early story tried out a lot of options for things to do with her, like having her overcome mind control to fight to save Orihime, then having Orihime turn the tables and discover powers to save her (which, I know some of you are cheering).

Kubo Tite even teased, back then, that Tatsuki was going to do more – even showing us teasing artwork of her as a Shinigami, with this absolutely rad-ass wolf-fur design to a sword, which kind of drives home that the one thing Bleach was really good at was delivering on excellent character designs for anime characters that could be simplified down to ‘wow, what a badass.’

Yet there is this weird trend throughout the early manga and anime where Tatsuki and Orihime are shown where, either by deliberate tease or explicit cluelessness, Tatsuki and Orihime are just shown as doing all these things that, well, they don’t look very straight? They’re shown listening to one another’s love songs on headphones, or being on their own trying on outfits, or Tatsuki coming around to spend the night with Orihime and implying they do it regularly, or the time they watched the fireworks together. You know, in the way that anime never uses to signify anything. 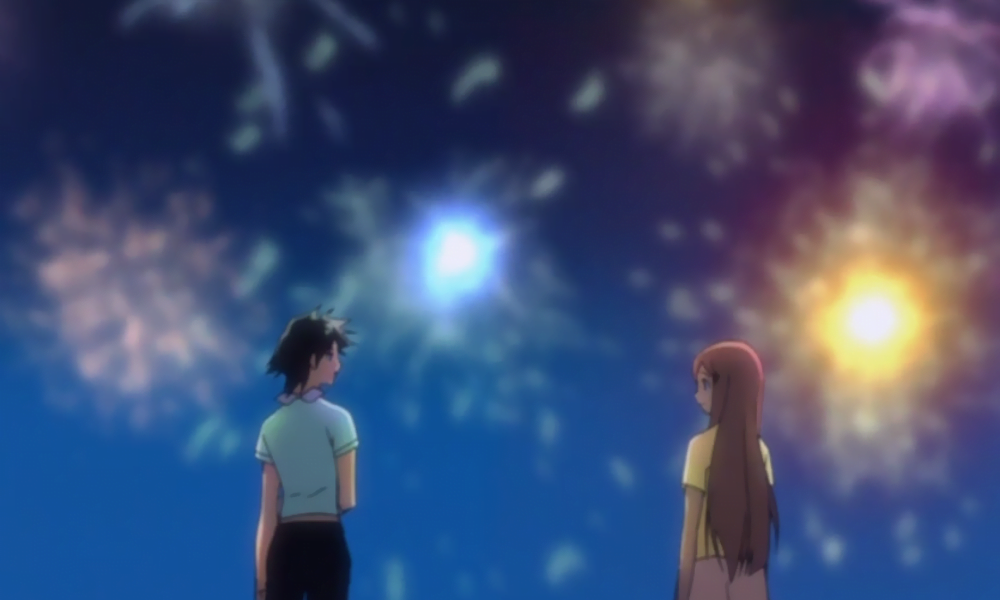 Was any of this going to happen? Of course not. Tatsuki and Orihime was something that Tite Kubo experimented with, in the early part of this series that was always just laying track out in front of itself. When the story did its first major reinvention by going to the Soul Society, Kubo picked some characters to take along on the next arc – for any reason, whether it being popularity, or editorial decisions or just what he had the most fun drawing – it doesn’t matter how or why, but just that it happened.

One of the characters that went along for the ride was Orihime, which you can kind of just make some sense out of just glancing at it. Like, Rukia wasn’t available, and a girl adds an obvious additional character to draw, and he’d just given Orihime some powers (and not given them to Tatsuki).

So Tatsuki got left behind. 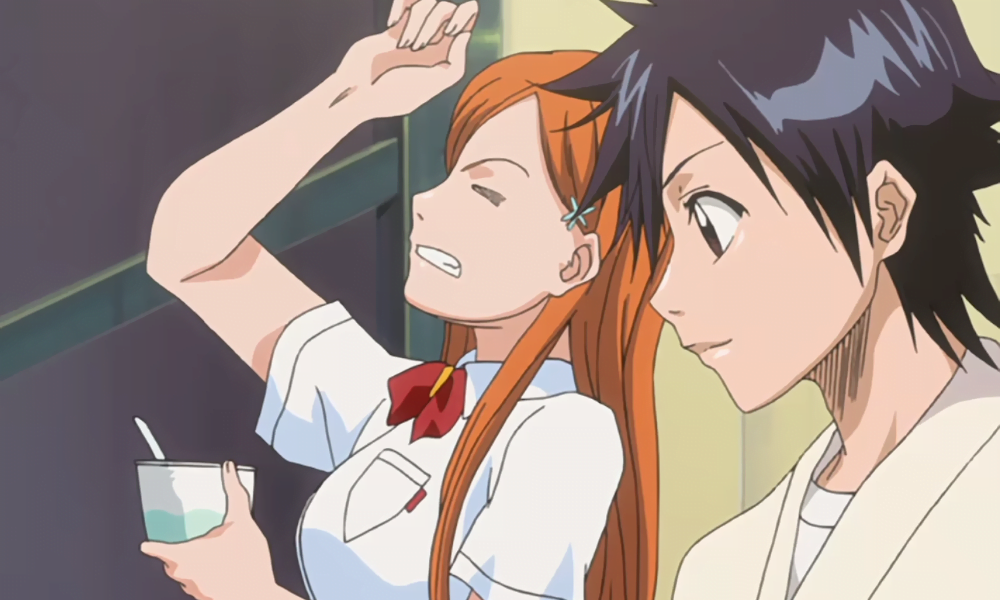 There were some hints at Tatsuki’s importance after that point. She gets to do some stuff in an anime arc that I mean, it makes sense, filler arcs are probably a great opportunity to use less-important characters doing their own thing. Man, that’d be cool.

But by that point, the story had pretty hard came around on the point that Orihime was one of the two possible end points for Ichigo, and probably going to be the end point for Ichigo. Dread plot momentum was at work, and at that point, the Tatsuhime ship was pretty much sunk.

But it’s not like anyone was paying that much attention.

I think that Tatsuhime is a really cute character dynamic, and it still stands out to me as a really great idea that Bleach didn’t follow through on. Part of the problem with Bleach wasn’t a lack of good ideas, but rather the execution on those ideas. What if Tatsuki and Orihime had come to Soul Society together, and that whole arc had a character discovering new power as she had the world opened up around her? Wait, they had that, it was Chad, and they didn’t find a way to do his story arc for literal years. Okay, but –

What if Chad was done well and Orihime and Tatsuki had something to do together to fight their way through Soul Society, showing people who couldn’t brute force their way through problems? Would that have been enough momentum to show these characters coming together, growing up, and then starting them on a trajectory that would have given this wonderful ship space to do something interesting rather than just slowly wear down to the dull nub that Bleach became by its end?

It’s still something I like, and still a dynamic I really love.