Talking about Transformers continuity is fraught because to say there’s a ‘canon’ or a ‘character’ is nonsense. Thanks to the neverending maw of capitalism and a loose vision of what matters to the people who engage with a brand that very much just started to sell toys thirty years ago, it’s not like there’s any kind of sensible core to anything. Talking about character and continuity of a story that isn’t just interrupted by commercial breaks but is basically constructed out of those commercial breaks is a fool’s errand. Anything I have to say about a Transformers character is going to be either contained within a specific bubble of continuity (like Animated), or sort of formed out of a general collusion of shadows shining on many similar objects, to see where they overlap.

With that in mind, have I told you about Blades? 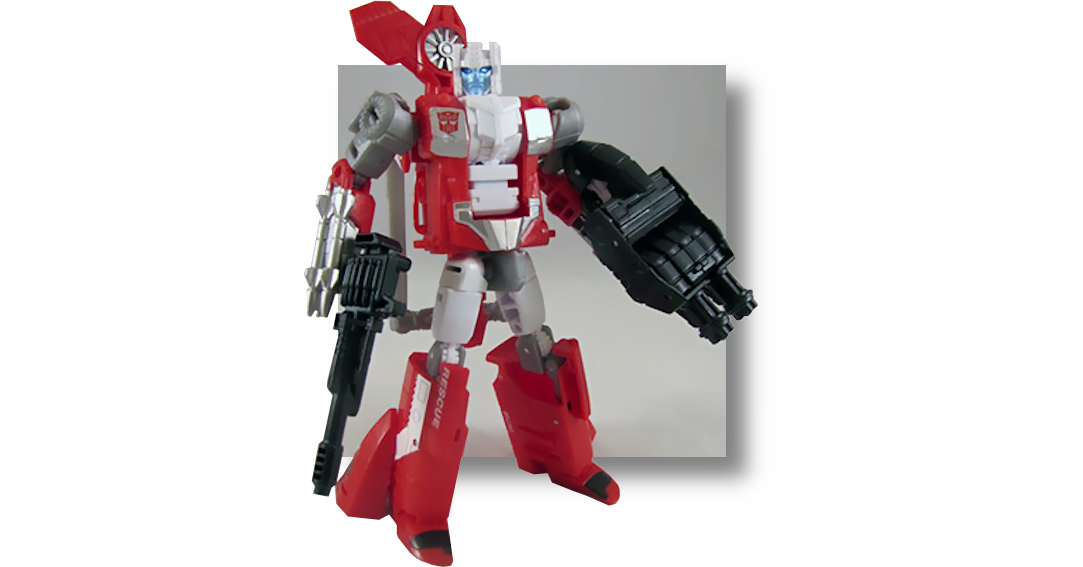 Assuming you know what a Transformer is – and if you don’t, look, they’re transforming alien robots that turn into human vehicles to hide in our society that doesn’t have transforming alien robots – Blades is a long-standing member of the continuity, and he’s been around since the first few toys (known as ‘Gen1’) and has been iterated on a bunch of times since then. What makes Blades truly stunning is that at some point early on, he was given something that actually looked like a personality and that meant writers could keep pretty much the same guy for all that time.

Not quite the same, though, of course, but mostly.

Blades is a member of the Protectobots, a gang of five Autobots (the goodies) that turn into emergency response/rescue vehicles. This group is led by Hotspot (who turns into a firetruck), and features First Aid (who turns into an ambulance), Groove (a cop) and Streetwise (another, different cop). This lineup is composed of some of the nicest goodniks in the entire Autobot lineup, with Hotspot being a living incarnation of one of those twitter feeds that’s nothing but retweeting pictures of dog accounts and people’s gofundmes, First Aid being a literal actual pacifist who got to be the centerpice of multiple stories about but how do i contribute to a war effort refusing to strike another, and Groove and Streetwise being those special kind of fake cops that don’t actually like beating the shit out of people.

It’s a very sweet, sincere universe, the Transformers, that’s fond of cops, and that makes sense, because there’s also only one Transformer who’s probably black, and in the live-action movie, he died first.

Anyway, the thing with being a member of this squad of softboys is that Blades is the one member of the group who is not, in fact, leaning firmly on the ‘nice’ side of the dial. Blades is an utter monster of a person by comparison to his friends and compatriots in that not only does he want to fight, he is actively looking for reasons to do so. He’s a helicopter, which means that mostly, his combat engagement should be at range from targets down on the ground, but apparently instead he would much rather be fighting people in melee – it’s even so specific that he mentions using his rotors to fight people face to face so he can feel their oil spatter on his face. 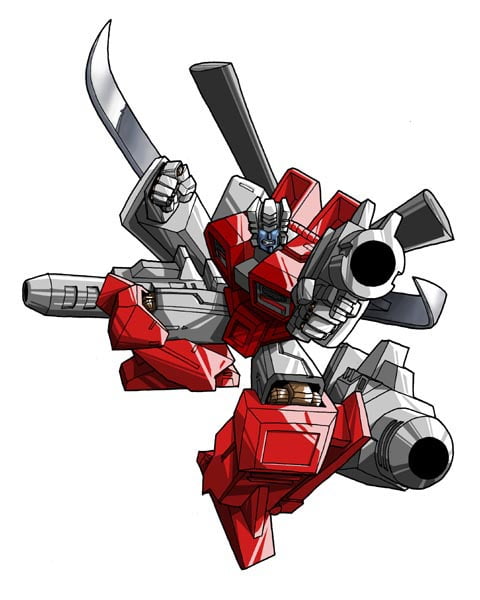 And Blades is in a group with two cops, a pacifist, and what happens if someone in a kid’s movie wished for a fire truck, a golden retriever and a big brother and the genie got confused and made them all the same thing, so it’s obvious this is a source of some tension. Especially since it’s not shown as being a point of tension. The rest of the crew periodically admonish him for being a bit too prone to suggest cracking skulls than they are, but there’s no episode I ever remember about ‘that time we kicked out Blades for committing a war crime,’ though we do have an episode where Blades beat someone up for being mean to First Aid, and when First Aid ran off to leave the team and fix (actual) toasters, Blades was one of the people who went to get his friend back, and promised to protect him.

Other points of continuity that come up is that once upon a time, back before there were Protectobots and the Autobots were living under a Decepticon-controlled Cybertron fascist hellstate (which doesn’t always happen, because Transformers continuity is holey as cheese), characters we know were living very different lives. For example, Grimlock (if you’re still reading here and don’t know who that is, god help you, but basically, he’s a walking, talking, headbutt to the face that transforms into a Tyrannosaurus Rex and generally wins every fight he gets into) was a gladiator that the Decepticons loved to watch fight against big groups.

In those gladiator pits, Blades was part of security. His job was to keep gladiators from getting rowdy. He got into fights with gladiators.

Which means that at some point, Blades has probably stepped up to Grimlock, of all people, and Blades still exists and lives enough that we can know about him, which is amazing.

We don’t know really why Blades is this way, but I appreciate it. Blades is absolutely a damaged, violent, one-man-hockey riot looking for an excuse to spill over, and yet when we see that violence happening, it’s always being put to work as either the task his friends aren’t willing or able to do themselves (like protecting First Aid), or it’s being restrained in the name of not wrecking things for his friends. Sure, this is mostly due to the simplistic writing of a kid’s story, where they don’t want to derail their story with a hundred characters constantly to deal with ‘Woops, Blades beat the everloving shit out of Hound again,’ and its cousin story beat of ‘why do we keep this guy around,’ but the image it paints is of a deeply damaged, violent boy who is doing everything he can to keep it contained, and part of how he does that is because of his found family.

That is the good stuff, the stuff I am here for. 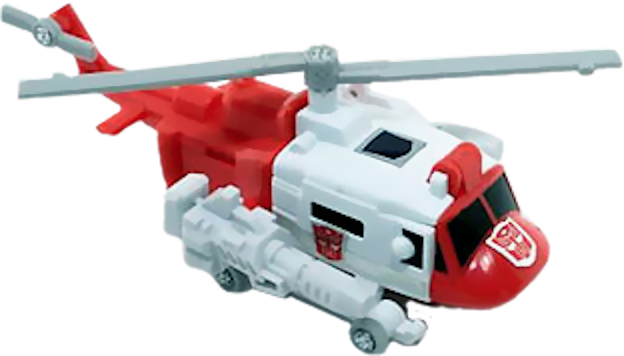 I know I love this character, he means a lot to me, and that vision of someone who wants to do violence, but can keep it under control is pretty meaningful to my vision of the person I was growing into being. I love Blades to bits, and I don’t currently own any toys of him, which is a bit of a surprise when I think back on it. The toys of him have varied, too, and I found myself strangely disliking the ones that try to make him look less like a bubble-nosed dorky rescue helicopter.

My soft spot for Blades is always going to be tied to the fact that he doesn’t turn into something dangerous. He’s not Vortex or Whirl, he’s not even as solid as Hotspot. The character of Blades is someone who life has handed a whiffle bat, and he’s resolved to use it to do as much damage as creatively as possible.