There a lot of words being spilled about Black Panther. I do not believe that spoilers are particularly important to the enjoyment of a product, but I know that people dislike spoilers. So no talk of spoilers. I know that a specificity of information is part of spoilers – by avoiding spoilers I can sweep along without providing detailed examples, which has a nice side effect where I can talk about more stuff without having to bog down in reference points.

Still, everything else aside, everything else aside: Black Panther is a great hecking movie. It’s a fun ride, it’s kinda like a spy movie and a kung fu movie and it’s a really good hero movie, and really, you should just check the heck out of it, it’s great. Believe the hype. I am a nitpicky motherhubbard and I think that every complaint I’ve heard about this movie so far comes from a place of digging deep in an attempt to find something to complain about, or ‘I wish there was more of this movie.’

On that note, I’m going to try and minimise whatever I have to say that’s basically about racism. This is  great movie and it’s very heavily anticolonial and it does a lot with African cultures and there’s language and clothing and worldview and a lot of stuff and straight up, I am neither qualified to talk about it nor do I have anything interesting to say. Colonialism is bad, slavery is bad, and anything I have to say on that topic is mostly only useful in light of how some white people talk to themselves about it. Don’t expect anything there. 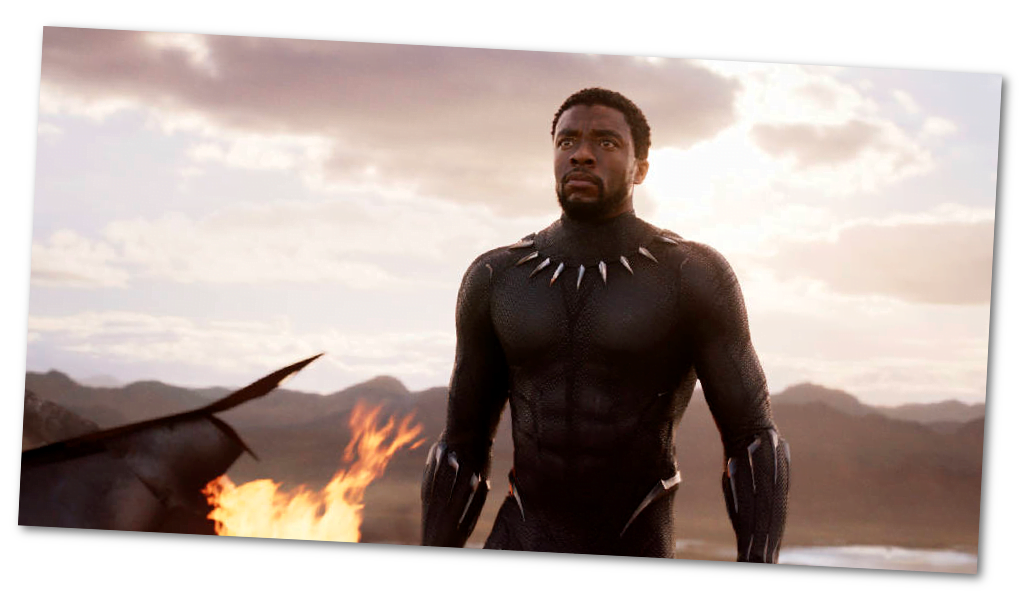 T’challa looks cool. Like, he doesn’t just look cool in the context of being a massive badass catboy, though I will note tail is a missed opportunity, but considering that one of the problems that Black Panther (and his comparative hero types like Batman and the like) style designs tend to have is that they can’t be expressive with their body and face in the same way. The black on black on blackity black black black look is extremely badass when it’s framed against the background of a sky, but it’s really bad when the limbs are framed in front of the body, which is to say it looks bad when you move your limbs across your body.

This happens a lot in action movies, y’know.

But in the movie design, they show four different Black Panther looks – one of which is muddy and indistinct, which works out great because it’s used for short sequence of Black Panther being the boogeyman in a dark jungle. The others however are shown with things that break up the line of the body, and they break up the shape of the Black Panther look, introducing things like blankets, golden jewellery, and purple shapes and outlines. 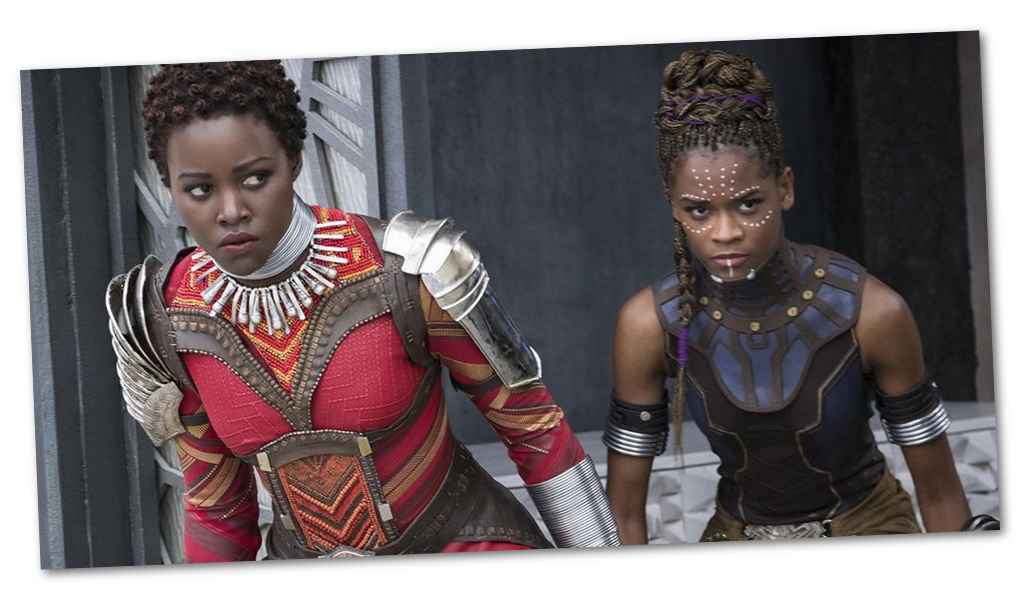 There’s this one fight scene which is done as one long cut. It’s a sequence that moves across a square room that’s cut into two vertical levels and you get to look at basically six or seven characters Being Incredibly Badass at one another and at targets. That one sequence would be the kind of thing that some movies would build up to as the entire movie, but in this one’s case, it’s not only an early-movie action sequence, it’s the kickoff of a longer sequence.

In a lot of other movies, putting your best action sequence in the middle would be seen as a waste, would paint the ending as being flat. But the thing is, it was a great contrast to the later story – in this moment, you have all the characters tightly confined, in a small space, then show them growing apart, losing each other, disparate until the very end, when everyone is solving problems as they’re fragmented by an enemy force. 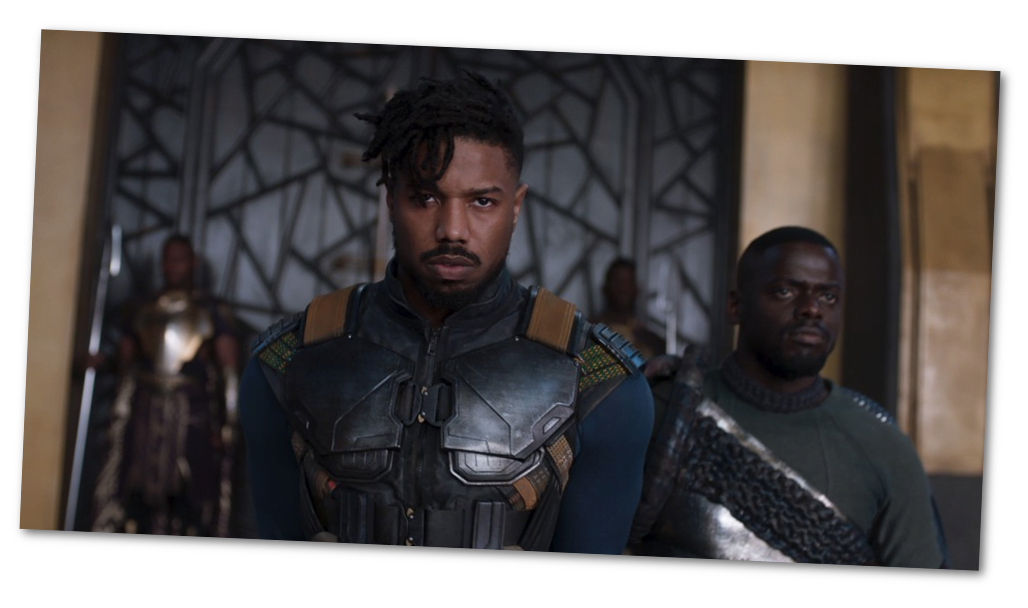 I’m going to have to go in on how awful a person Killmonger is at some point and that’s going to suck. There’s also one thing that does kinda make me laugh, in that Klaw has a brand on him that doesn’t make sense as presented in the story, but oh well.

Oh, don’t give me that look, it’s from Ultron. 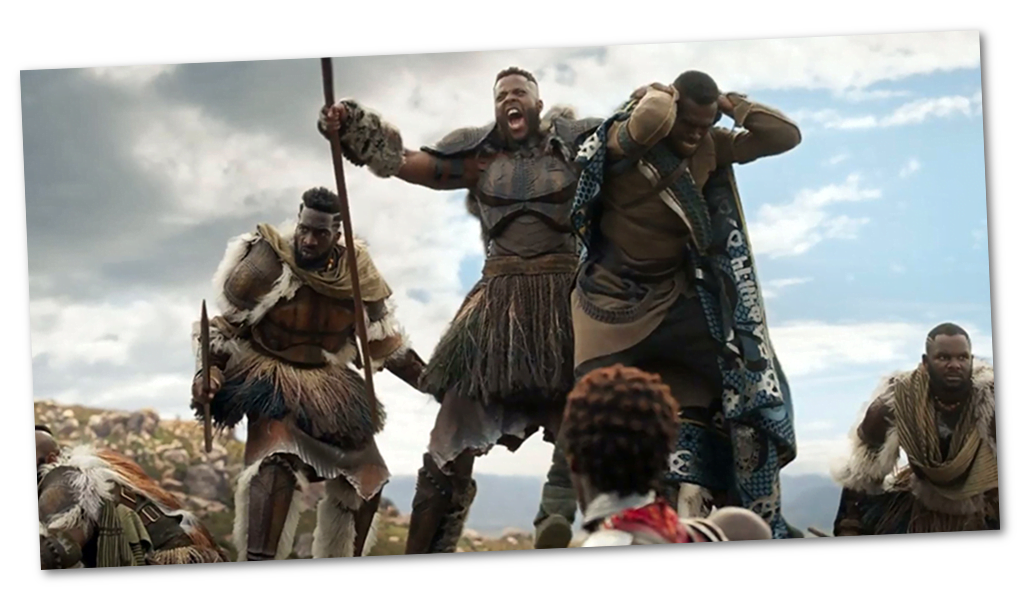 The movie does a lot with tight, deliberate structure. To check it out, any scene – from major break to major break – and think about what that scene introduces or explains. Sometimes the scene has two major elements in it (two characters reacting to the same circumstance or to one another), and those two characters repeat. I think my favourite thing about this structure is the way the story could serve up cool moments in anticipation – when you saw a character apparently dismiss a potential future that would be totally cool, you know it’s going to happen and then when it happens it’s great. There’s even one small note of when a sequence shows you a number of objects, you know that each of those objects getting wrecked is coming up.

This actually led to one of the greater complaints about the story, where something gets mentioned once, and doesn’t come up again until the last minute, but even that I didn’t mind. The story has a lot to get to, it has a lot to cover, and it’s covering three very busy days in the history of Wakanda. I’m not saying that story beat is handled excellently, but I kinda love how the main solution to that would have been for there to be more movie. That particular scene didn’t need to be the resolution, but the sheer tightness of this story made it a little haha moment for me.

With the understanding that almost every single thing in the movie that gets used gets used twice, everyone who shows up shows up twice, it’s easier for the story to create what we call a schema. When you show an element multiple times, you can show what about it stays the same, and what about it changes. It makes a world more whole. 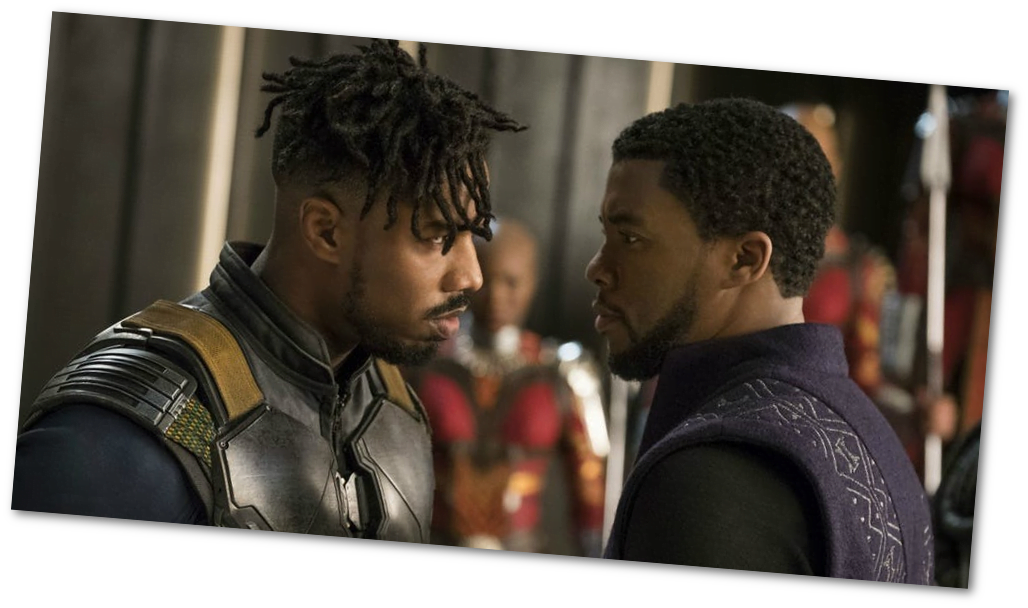 This movie is great and you should check it out.