At the time this post goes up, I will have already played this year’s Weekend D&D game. If things went as I expected, I’d have played a Battlemind, modelled on Gilgamesh from Fate: Grand Order, in that he’s a reckless garbage boy, a property-rights-confused wanna-be Hero of the Sands of a half-Gerudo.

This has meant looking at the class the Battlemind at some length, and let me tell ya, it ain’t great. 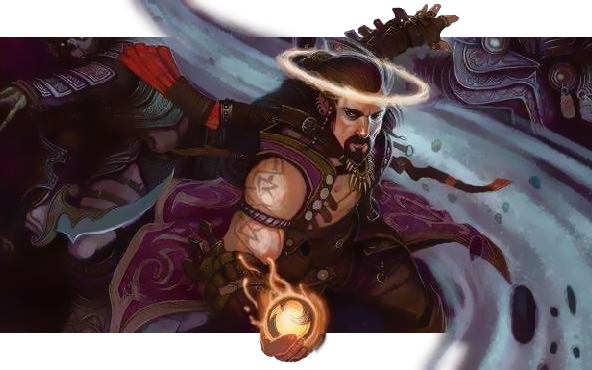 For those of you not familiar with 4th Edition D&D, here’s the basics: The Battlemind is a defender class, meaning that in combat, it wants to spend its time forcing enemies to prioritise it – it’s a form of control. The defender wants to make enemy actions as fruitless as possible by making those actions directing attacks at someone who can best handle it, and does this by being the toughest person on the field and then making it hard for enemies to attack other people.

One of the ways the design of 4th edition encourages this tends to be with a mechanic known as marking. If you mark an enemy, that enemy has penalties to attack anyone but you. For some monsters, this mark is easily enough to encourage them to just come at you instead. For some though, they’re so good at hitting things, or their powers are so useless against you, or so effective against someone else, they’ll ignore this mark penalty and just try to attack other people anyway. That’s where the other half of this comes in; punishment.

Punishment isn’t a universal mechanic. Some classes punish with a specific power, some with a triggered effect.

Now, the Battlemind has a fairly tolerable Mark, but its punishment is really weak, sort of. If we want to talk about that we’ll wind up talking about action economy. If you want we can get into the conversation about action types, but it’s probably for the best we tell you that there’s this whole spectrum, kind of like this:

And the Battlemind lives in You Can Do It Once Each Round. A round, in this context means the sum of all turns – one player has their turn, then the next turn, then the next and so on and that full time is a round. The Battlemind can punish one opponent, every single round. By comparison, a Fighter can punish an opponent every single time that opponent does something, and a Paladin’s punishment doesn’t even require the Paladin to do anything.

This is the bones of how the Battlemind works. There’s a lot of cool stuff the Battlemind has going on, but this structure plays into everything the Battlemind can do. To do the job of a defender, a Battlemind needs to spend a lot of actions and pick its punishment very carefully, and it’s entirely possible that if you choose to punish an opponent, you leave yourself open for a worse thing that you should have punished later in that round. This means that a battlemind has to view their punishment and marks not as things they want to do but rather a thing they might sometimes not want to do.

This may seem to you like it’s a fun, tense design, but this is happening while other things are happening. Other defenders get to focus on setting up battlefield locations, making choke points, blocking enemies from their allies, all that stuff, and part of why they can do that is because they know their job of marking and punishing is mostly handled.