There were two sets of the first wave of expansions for 3.5, the class style books, known as the Completes, and the race books, known as the Races of books. The Completes touched just a tiny bit on the early days of the class role system – with the first wave being Complete Warrior, Mage, Psionics, Divine and Scoundrel, but expanding into things like Adventurer and Champion. The Races Of books gave you a run down of three races at a time, linked by a common theme, and that was a theme that was routinely straining at the edges. Halflings got treated as a ‘race of the wild,’ and gnomes as a ‘race of stone,’ as opposed to their proper place they shared of ‘races of hobbits fans.’

No time for gnomes or halflings, me, I know.

In Races Of books, the mix of content is largely flavour with a small amount of mechanics – there’s a whole chapter of mechanical options but they’re there to mostly round out the explanations of the lifestyles and potentially useful archetypes for your player characters. Plus, when you’re talking about the flavour of a group of people, you’re by definition going to be dealing with a moving target – half-elves may be ambiguous and rare or they may have a large community, depending on the DM running the game, or the world they’re set in. It’s semi-authoritive, a way you can point to a rulebook and say ‘it says X’ but any sensible rejoinder is ‘so what?’ 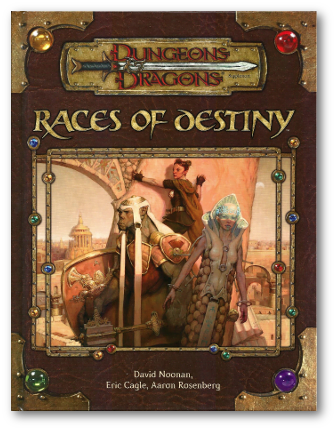 These 3.5 D&D books were pretty cool stuff, truth be told. There’s a careful mix to blend when you’re dealing with a character expansion; you’re trying to present stuff to a player that can inform their focus on their own character, the one thing they have to deal with in the game. DM options can be kinda surface – after all, making an entire world is about creating impressions. Giving a player a meaningful insight into the life of a character whose skin they’re going to inhabit is instead really hard.

Complicating that further is that players bring their own takes on things too! So the flavour department of this actually has to sneakily approach things with a mechanical bent – to induce players to think about how things probably happen, about interactions with the world, that then help shape the framework for your character in the world. Races of Destiny is good here!

Yet, it wouldn’t be a 3.5 D&D book without something that you can lean on and break it, and that’s where Soothing Voice comes in, a class feature for half-elf bards. 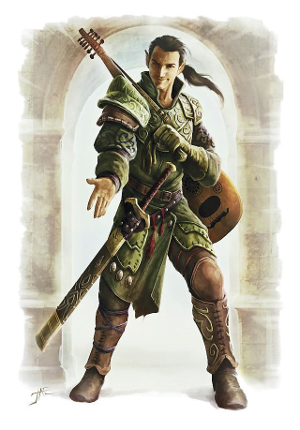 Half-elves in 3.5 were bad. They lacked all the meaningful support of their elven counterpart, the stat bonuses that made elven variants so good, and they didn’t get the human’s more powerful option of a whole extra feat. It was a race that simply lacked, because some jackanapes in development thought that the grab bag of stuff that could be replaced by a few hundred gp of gear was worth a whole feat of flexibility.

Half-elven bards got a power called Soothing Voice in Races of Destiny, a power that replaced something you wouldn’t miss. This worked like a spell that shut down combat in a 30 foot radius around you, with everyone who could understand you calming down and getting out of a mood to fight. It was modelled on a spell which you wouldn’t normally get until level 3 as a Wizard, and gave a saving throw.

Skills, on the other hand, increased at a rate of (d20 roll+your level+3+your relevant stats+any bonuses you have), and boy howdy could you get some bonuses to Diplomacy. It was not at all difficult without doing anything silly to have a level 4 character who had a diplomacy skill modifier of around +25, meaning that any enemy who wanted to resist this Soothing Voice that shut down the combat would have to roll a save of at least DC 26 – compared to a wizard casting that spell at the same level being lucky to hit a very good DC of 18.  You could maybe get someone to roll a natural 20 in that area, and save against it… but then the bard could just do it again next turn!

This is pretty strong, but what’s more weird is that this power scales up hard. Because as you levelled up, skills became less important, so skill improving items got better and better. +10 to a skill was a very expected magical item bonus, and quite affordable. Things that let you overcome language barriers became available. You could get items that would let you communicate with creatures that didn’t have languages.

I played with this ability, and every time I used it, the DM just ignored it, which feels bad, but it was a very reasonable thing since the power was clearly busted as hell. At level 9 I had a Bard who could drop a DC 60 ‘no, we’re not fighting’ bubble on the battlefield, nine times a day, which was extremely hard to exhaust.

When you make things scale, check what they need to scale against, and if things can get out of hand from one another.