August! Start of a semester, a new class, lots of process work and not a lot of work on game development. It’s the first month I’ve felt really uncomfortable with the amount of gamedev time I had going on, and I’m not happy making you wait. In blog posts, I liked my review of Luke Cage Season 2 that examined characters in terms of what isn’t normally admitted in media, an article summarising the ways infrastructure fails ‘Asia’ in board games, and how we can start pushing against that, this treatment of Glory In The Thunder as an example of textual frame of reference, and I was really happy with this graph-full examination of choices I’m making for Boat Game.

Not one, but two videos this month. One of them was an academic experiment I liked a bit and want to do more of, and one was a format choice.

First up, I played Space Quest I and Fox and I talked about it. This is like the Let’s Drown Out format I really liked before Yahtzee just became incredibly intolerable. This is half made up of explaining a game to someone who’s never played it (with appropriate complaints), and half made of conversation about related design decisions. Plus I like hanging out with Fox.

This other one is a bit more of a heavy lift but I really liked doing it once I had the play of it clocked. I might do this for other old DOS-era games, with games like Traffic Department and Blake Stone in my mind.

Neither of these videos got the traction that Meaningless heterotopia did, but they do different things and are a bit easier to make.

This month’s game release was or is or –

At the time of this blog post, it’s not launched. Sorry. Postal holdups keep me from being able to pull the trigger on it. The game is called Clout and it should be available as a print-and-play in a few hours for my Patrons unless something grabs me from another source.

And this month’s shirt? Egg in black and white. I don’t honestly know why I did this design beyond I just found it kinda funny. 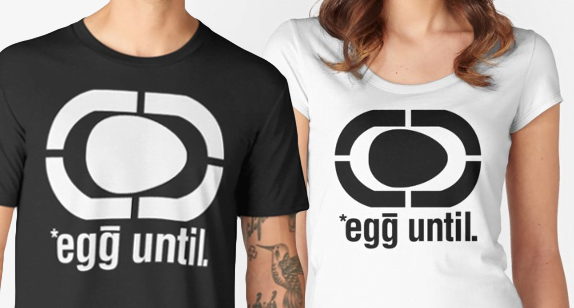 I’m working again, which means that I have another thing chunking into my time, which is largely not game-related. That’s a bummer, but on the other hand, it means more money to do things like hire artists? So that’s cool.