With August over, it’s also the end of Magic Month and it’s time to look at how that worked out.

I am pretty unhappy with the way Magic Month played out, because while I was able to find a bunch of youtube resources on the subject that I enjoyed, a number of them went away over time, meaning I had to pull articles that were originally going to point to wonderful tutorials. I also just couldn’t find that many games that related to magic, the kind of magic I wanted to, and that meant the game pile games kind just wound up being about how hard it is to do magic in the first place. In games, it’s much easier to just fake stuff.

I don’t think Magic Month was a total bust, though: I still loved getting to talk about Ace Attorney: Apollo Justice, and my article on Thimble Riggers and the challenges of dealing with people who believe in actual, real ghosts. Also, I did some writing about a character from City of Heroes,  which was unexpectedly popular. The world building is the main reason I shared it.

Every attempt I had to make a video this month kinda fell through. I have one more trick up my sleeve, but at least for now, enjoy this last half of my previous video – playing out a very conservative The Swindle.

But then, at the last minute, I finally concocted a solution! It was pretty intimidating, but it also taught me a tool I can use and hey, that’s part of why I’m so dedicated to using this video software. Process, right? Anyway, that means I made a second video this month, about the card game Solitaire:

This month’s shirt was born out of the most basic spite – I told my class I’d get this shirt, and so, I made it. 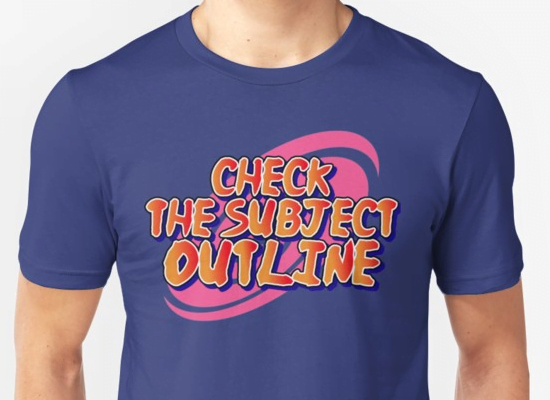 If the subject outline is unclear, tell me how, tell me where. I want to make good subject outlines! I want them to have the information in them that you need that we don’t have to change!

Game work? Well, that’s been subsumed into the PhD this month, despite having a prototype game idea I’m working on. Keep an eye out for a thread on that.

This August has been also part of a major process for me in the PhD. There’s a part of the process known as the Research Progress Report, which is due for presentation in September, which means it needs to be done by August. This was a real work, because it was both building up enough words and then going back from too many words. There was a lot of reading and revising and struggling with a task and managing that task around the time I had to send it.

This is also a month where my backlog of written articles really dwindled – fact is, the RPR took a lot of my effort. Just straight up, it was more important than this blog. I was able to meet both demands, I didn’t miss anything – but I know that throughout these weeks, I have been focusing more on one thing than the other.

This may mean you get some more lists and popcorn style articles. Strangely, though, I’ve noticed a positive response to some of those! I know I’ve said in the past that listicles are a good structure to use, especially when learning how to do things, but I don’t do them very often. I think part of it is that I just don’t have many things I have lists of. I’m more inclined to do single deep dives on things.

Also, a key on my keyboard is failing. Can you guess which one?