Hey, heads up, before you read any more, if you work for Wizards of the Coast and in the Magic The Gathering division, there’s an outside chance you’re Not Allowed to look at fan-submissions of cards or mechanics or any of that guff. If that’s you, I do that kinda thing in this post, after the fold. Don’t worry, I am pretty sure you’ve come up with this idea beforehand and I’m doing nothing you don’t already know about.

The rest of you, join me after the fold.

Back in 2007 – Jesus christ, 2007? – Wizards of the Coast released the set Future Sight, which promised a look into Magic’s future, with different mechanics and peeks of things they might do in the future. This was also a perfect opportunity for them to trot out a bunch of minor changes and test how they worked. Some – like Reach, Shroud, Lifelink Deathtouch and Shroud – really worked well. Planeswalkers were hinted at, and some mechanics we came to accept like coloured artifacts, delve, and Tribal.

One card however, was not particularly well received: 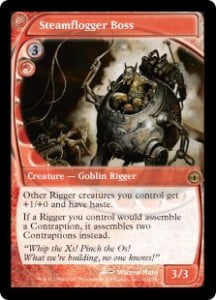 We weren’t exactly kind to the Boss when we met it, in no small part because the card doesn’t explain its potentially interesting mechanic, and also because the card happens to suck really badly. Still, the question became: What is Assemble? What are Contraptions?

Recently, while fooning around with fan-made cards, I stumbled on an idea that, when I was done with it, I realised should just have the card types renamed. Check it out. 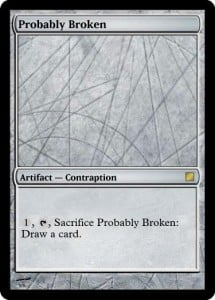 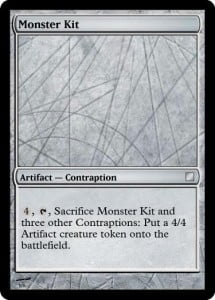 If you open this kind of card – which may need a reminder text to indicate that, lacking a mana cost, you can’t play these cards – it leaves you with the question. What is this card? What’s it for? How does it work? Then there’s other cards that relate to these mechanics: 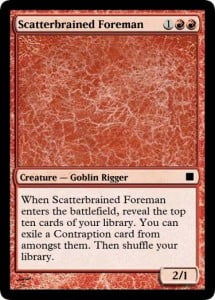 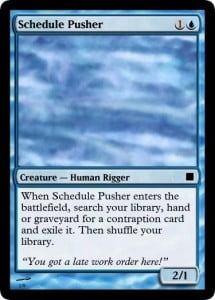 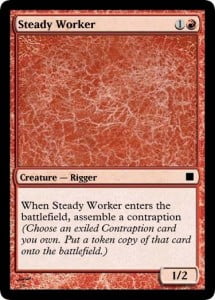 That’s the basic idea. I’m not saying this is the best implementation or even the one Wizards will use. I like it because it can invoke the idea of cards that are desireable in a deck in a small quantity – while still having effects you want to re-use.

Now here’s my problem: Now that I think of this mechanic as Assembling, and relating to Riggers… I kind of can’t think of what else to call it.