I’m a superhero fan, which is to say I’m someone with a lot of very firm opinions the way the superhero media industry is just ruining everything, and completely messing up. This is a natural part of the progression as you get older, but I at least am at the point where I can bring myself to acknowledge it’s much more I don’t like this rather than this is good or bad storytelling.

Comics love weirdo aliens that are human-mindset compatible (like M’gann M’orzz). Comics love alternate dimension characters that come from a different universe that’s somehow meaningfully mostly like ours (like Power Girl). And despite loving M’gann and Peej, I really dislike these two ideas. In a shared roleplaying space like City of Heroes, you don’t get the leeway to just tell people hey stop making characters I don’t like, though, and I’ve come to terms with that.

When presented with a problem like this, though, a good impulse is to work out why things are different, work out what you’d do to make the thing you don’t like work in a way you do. Which is why I wondered how I could make a Suspiciously Human Alien or Extradimensional Person in a way that didn’t make my brain flip sumersaults at the math involved.

What I got out of it is Rift Girl. 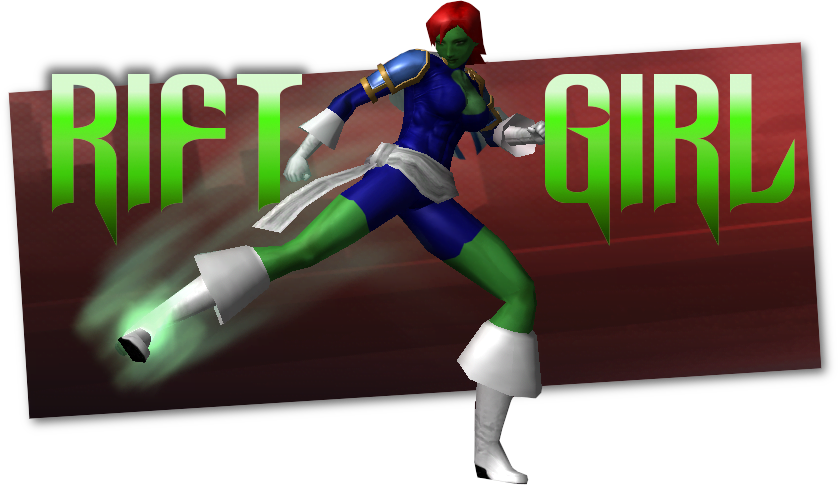 First up, here’s her in-game bio:

“But what are we doing here, at home, to fight the dreadful menace of The German Imperialism? Why, there’s some, like the top-secret RIFT project, storing away examples of the finest cities of the 20th century, in alternate dimensions where the people can grow and thrive, and become brilliant bosch-bashers! And as long as there’s funding, there’s no way to lose track of them, or see them fall to the work of the Hun! Stay tuned, for partial excitement!”
– Project RIFT explained, unreleased educational film, 1939

Madison Max came from a place that’s a bit retro, a bit far away, and plenty, plenty weird. But that doesn’t matter – what matters more, to her, is that she’s here, in Paragon, to be a hero, and contribute to the fight against fascism!

Alternate dimensions and alien cultures are great if you want to give a character a kind of contained metaphysics. You don’t have to explain how they relate to the things in our world or why they may have missed something or other, you can just say that those things don’t exist where they’re from. These are societies you have complete control over, and it means if you want a character to come from a place where things work differently and people just have to accept it, you can. Consider a lot of our societal ideas we have that can be just different in a different society. Ideas like marriage, gender, violence, heroics, education or capitalism can be wildly different if you control a different space.

Alternate dimensions bug me though when they’re just one of a million options because it opens up too many questions for me. After all, why this and not that. Why are these changes able to have such wild transformations? Alternate dimension are written in between the space where they’re not realistically similar (in this world, one flower evolved to be peach instead of purple, and everything else is the same) or realistically different (if the mass of earth’s trajectory was off by a meter a billion years ago, literally none of anything would be ‘there’ when you went to reach into the other dimension). How do I get an alternate dimension that’s meaningfully like what we have here?

My idea was to make the alternate dimension a dimension built out of this one, and that gave me the idea I wanted: Nonsense Wartime Propoganda Super Science!

Rift Girl’s world is a pocket dimension made in the 1940s as part of the War Effort against the Super Science Nazis of the superhero universe. We blame so much stuff on this era of science (just look up the weird stuff people believe about the Philadelphia Experiment), and that gave me an aesthetic to start from. Bonus, it let me talk about the natural followup to a good thing (fighting Nazis) and the way our cultures managed that project (not preventing more Nazis later).

Rift Girl is from a city that was built as a self-sustaining environment in the desert in the United States, then super-science blinked into its own little parallel dimension where they could set the rules enough to make sure that entropy wasn’t going to be a big problem. The idea was that these cities would work as both safeguards against Nazi invasions of countries, and places to recruit and train the best possible Nazi-fighters ever. Then, because of funding cuts, these entire cities were lost to paperwork and time, and the Rift Cities fell out of contact with the Primal Earth. Some were decommissioned properly after only a few years, and one, Maddie’s home, was forgotten, lost in the shuffle, or deemed ‘too hard’ to recover.

Fast forward Some Years, and Rift City contacts Primal Earth, opening a portal they developed on their own with their limited materials, and send through messages and an Emissary – Madison Max. Thanks to a delay on broadcasts arriving in Rift City, she thinks it’s Prime Material Year 1999, and party for the millenium, even made herself some of those party glasses, and oh yes, to beat the shit out of Nazis.

Madison was chosen for her task because she was basically a super over-achiever student, someone who was both obsessed with the Primal Earth broadcasts they were able to decipher and well-trained and disciplined. Smart, educated, extremely strong in a super-sciencey way, and given special, strange, rift-warping powers by having broken the ‘seal’ on the Rift City tunnel to Prime Earth, she’s ready to be a full blown superhero, punching Nazis and Saving the Day, just like all the TV shows she’s been bootlegging from Primal Earth have shown her.

Also, thanks to the way light worked in Rift City, she – and the rest of the Rift City people – have no idea that the time spent in the Rift has made them all green, or rather, that anyone is any colour other than green. She thought everyone she was on TV was green, just like her, and now she’s having to adjust to that. Also the twenty year time gap. Also discovering that contrary to how she was raised, Americans think Communists are bad, even though they fought Nazis so well. That’s weird.

Mechanically, Maddie is a Radiation Armour/Street Justice Tanker. In a way, she’s a pastiche together of Superboy and Miss Martian from Young Justice, a super-strong but visibly strange person from another world. The City of Heroes universe has four clear examples of actual honest-to-god fascists to fight and you know, that’s on my mind lately.