Ladies and gentlemen and other, I am a nerd. I am a nerd of that familiar category that loves to think I’m more capable than people who are professionally paid for a task. I want to talk to you then, about a time I delved into this hubris, and tumbled out the other side.

I have written about Magic: The Gathering design quite a lot. Back in the day, I did it in a fairly formless, low-competence, high-passion way, and while I’m embarassed about it, at the time I had the arrogance enough to feel entitled to talk about it. One thing I was quite sure of was that I wasn’t a limited guy. I was a constructed dork, and I knew I was nibbling around the edges, a space where competitive interactions bled over into casual, where we poached from good players to make interesting or fun decks, or at least their best principles. 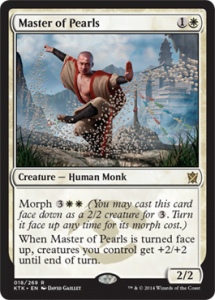 The Master of Pearls was a Khans of Tarkir rare I skipped over when I first saw it because it was a bear with a morph ability – a clear tempo card, probably for limited. Then the pieces locked in in my head and I started to get annoyed. See, Master of Pearls was a morph whose flip-up ability cost 5 and lasted a turn. In Theros, we got the same effect for 5, and it didn’t go away, meaning that Master of Pearls couldn’t replace the Dictate of Heliod in decks that used it.

At the time I penned a few thoughts about Master. I don’t know for sure if I said it in public, but I cemented in my mind that Master was a card that existed only to mess up limited – it was a limited trick card that was too good in limited, but in constructed, it was worthless. This was a bad card, and Wizard should be ashamed of it. Either make it better for constructed or worse for limited, but don’t let it exist in this strange twilight space.

And then, Fate Reforged: 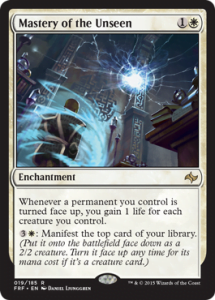 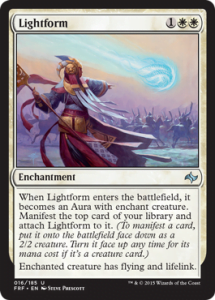 The interaction here is sharp, so much so I didn’t notice it at first. Lightform can pick up a Master of Pearls and make it a manifest. Then, then, the flip-over cost for it is 2 mana, and gives a gut-clenching +2/+2 at instant speed to everything you have.

Is that amazingly strong? Not really. Your odds of scoring a Master of Pearls off the top of your library is pretty low. You can build to put it there, but that’s basically looking like a combo. If you use Mastery of the Unseen to barf a bunch of manifests up, you can have sort of fun deck holding off, a waiting game while you try and make your opponent find the one that’s actually a dangerous creature that can flip over.

But it’s interesting. It’s something that Master of Pearls can do. And even if it’s not good, it’s a purpose that doesn’t just look like a card that’s designed to kick you in the guts in a limited game. It’s now another turning cog in a game, it’s going to be someone’s favourite ‘combo’ piece. And this sort of low-key lurking realisation is the sort of thing I hope we can all giggle about when we find them in our card pools.