I love me some 4th Edition D&D and it’s a well known fact I love complaining about things, so one might wonder why I didn’t do both at once. Well, for a start, I find that most complaints about 4ed D&D are pretty wrongheaded, usually building around nebulous ideas of ‘feel’ or ‘style’ and acting as if it was bad that a game did what the game was trying to do. That isn’t to say, though, that I think 4ed D&D is a flawless system by any means, and as if to prove it, let’s talk about a really stupid decision it has going on.

In 4ed D&D the damage type system and resistance system is pretty solid. The rules, almost always, work the same way and you don’t – mostly – have any oddness. The damage types are not created equal by any means: Necrotic has to run headlong into a lot of resistances, and Radiant is overwhelmingly well supported (and we can get into uneven support another time, but that is also a problem with 4th Ed). The point is that mostly, damage types were created equal.

Poison, in 4ed D&D had the special clause that any creature immune to poison damage was also immune to all effects of any power with the poison keyword. This kind of makes sense: poisons, as represented by like, toxins you put in people’s drinks, shouldn’t be affecting you if the poisons themselves don’t hurt you, right?

The problem is this rule is extremely rarely going to come up: Poisons as a tool in D&D were really inconvenient and there’s very little way to use poisons the thing. There is, however, a handful of powers that have poison effects , and a surprising number of enemies who are immune to poison as a sort of throw-in effect. Most undead, for example, couldn’t be poisoned. And okay, it is probably okay that enemies can’t be forced to choke and gag in a Poison Cloud power, fine, buuuut… 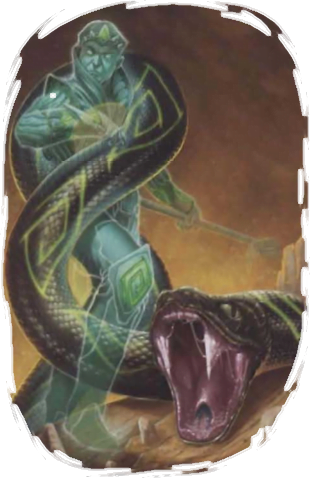 Here’s the art for the Coiled Serpent paragon path for the Druid. When Druids like this are in their beast forms, they do extra poison damage. What that means is that at level 15, your Savage Rend deals its damage and slides an enemy… but at level 16, your savage rend still does the same damage (they’re not immune to all of it), but don’t get slid any more.

This is pretty silly, and there’s not really an obvious or easy fix to it with the rules as written. The easiest way I can see it is to separate Poison Damage Type on powers from Poisons, the things you put in strangers’ foods.

It’s a corner case, but when you consider that the druid paragon paths are pretty limited in their application (thanks to splintering, which I’ll discuss another time), if you want to do more damage with your paragon path, this one is one of two options, and it’d be fine… except for that oddball clause that means, as a controller, all your secondary effects on your powers stop working once you have the path.