There are tales told, in the deep and dark places of the world, about vast, floating multi-eyed magical monsters, their minds full of hate, seeing a world of imperfection and foulness that they refuse to abide, wanting to reshape and destroy it all at once. There are tales told about their variations and mutations, things that they see as vulgar but necessary – smaller versions of themselves, foul mutations and permutations.

But there are other variations, ones they don’t mean to make.

Swallowers are chaotic, anarchic creatures, who look like the famously powerful tyrants of the underdark, but sharing none of their ambition and hate. Instead, what they have is curiosity, bubbling up from within as they bounce and float around the world, exploring the world. 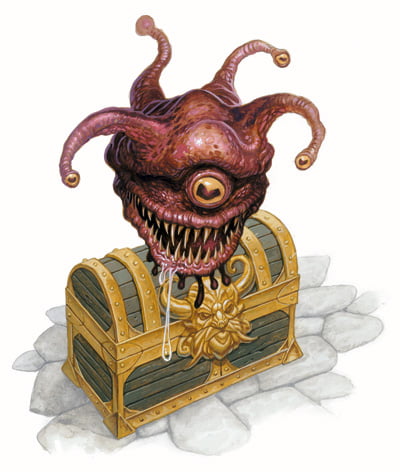 Glossary Note: Conventionally, the term used in D&D for this mechanical package is race. This is the typical term, and in most conversations about this game system, the term you’re going to wind up using is race. For backwards compatability and searchability, I am including this passage here. The term I use for this player option is heritage.

I have no good explanation for why I made a 4e compatible race of Cute Beholders who Lick Magical Items.

But uh, here they are.

Speed: 2 square. Fly 6 squares (altitude limit 1). You cannot use this fly speed if you are carrying more than a normal load. Swallowers that aren’t flying tend to roll across surfaces and sometimes bounce themselves.

Languages: Common, plus any one.

Flexible Fangs: You have a natural weapon, a bite, which deals 1d8 damage, with a +3 proficiency bonus. After each extended rest, you can rearrange the teeth in your mouth and tongue to change this bite’s weapon type.

You can always use your highest ability modifier to make basic attacks and determine damage rolls with this weapon.

Any magic weapon you Taste with your Swallower Stomach ability that can be enchanted on your bite. A weapon enchantment can’t be put onto your bite attack if it couldn’t be put onto a weapon of a matching type.

Swallower Stomach: You can consume magical items and memorise the magical configurations of the abilities they grant. This allows you to use the magical abilities of those items, as if you were wearing them despite not having the means to do so. This is known as ‘tasting’ by Swallowers. A magical item that a Swallower is tasting is treated as if the Swallower has that equipped.

A swallower can reconfigure the magical items they’re Tasting after every extended rest. They can also spend a healing surge to reconfigure them, in a process that takes ten minutes.

At any given time, a Swallower can retain the memory of any number of magical items they have eaten, but they can only Taste a normal number for a character with a conventional body.

After a Swallower has eaten a magical item, they can ‘shed’ magical dust off their body that is transformed to residiuuum – which allows a swallower to convert magical items to residuum very quickly and efficiently, as per the Magic Item Values table. Any non-shed Residuum is part of the Swallower’s retained residuum.

What this means, essentially, is that a Swallower can eat magical items to equip them, and when they get better items, shed the residuum of older items. If you want to re-equip an older item you used to have that you ate, you can do that after an extended rest without adding or shedding residuum. Keep track of your current total budget if you want to do complicated item rearrangement like this.

Baleful Beam: You have the baleful beam heritage power.

The Swallowers are a mistake that intends to make that everyone else’s problems. Attempts to coalesce powerful life forms from other ancient magics, and unnameable tyrants of the underground rarely yields success – but it sometimes yields failures. Often mistaken for other monsters, Swallowers aren’t the famously large and dangerous antimagical underground threats, but are instead much closer to the surface races. Particularly, it’s their ability to have empathy for others and to have a sense of fun that separates them from their aberrant origins.

Play a Swallower if you want…

A Swallower is a floating spherical creature, usually just under a meter around, with a body mass comparable to a large goblin. Their body is dominated by a large, expressive eye, under which there is a fanged mouth. Jutting around their body are an array of short, stubby tentacles which it can use for in concert for some manipulation, though it’s more common to see a Swallower use their mouth and tongue for complicated devices.

Swallower skin tends to be climate-affected; rough and dry in warm climates, soft and fuzzy if from cold. The Swallower, being a magical creature, is adaptable in its lifetime in a way most nonmagical creatures aren’t.

Swallowers rarely wear clothes, though it is not uncommon for them to wear non-functional jewellery that they can adorn about their bodies. Sometimes they will drape scarfs about their body.

As a Swallower, your primary way of interacting with the world is to see a vast space full of things you can lick, poke, eat, bite, or taunt. Fundamentally mischievous creatures dreamt into existence by a failed magical experiment, the average Swallower has no vision of greater civilisation or some sort of cultural loyalty, and certainly no investment in aberrant monster races like themselves, you’re much more likely to be acquainted with or connected to someone who makes you feel happy or amused.

You have means to make things – you can definitely be creative and artistic if you want – but the default Swallower sees themselves as a strange exception to a world that gave rise to them, and find that ridiculous. Swallowers are absolutely capable of understanding people, caring about their problems, fairness and unfairness – and even aspiring to great heroic deeds – but it’s always with a quiet chuckling at the ridiculousness of things.

Swallowers are perceived as…Oh god, what is that, is that – no, it’s too small. What the hell is – look at all the teeth

Without a centralising culture, Swallowers tend to pick names based on the people they first interact with, or that they find funny.