A complaint about 4th Edition Dungeons & Dragons was the ‘loss’ of a bunch of utility magic like Rope Trick and Leomund’s Hut. Typically, I hear it framed as the wizard specifically lost something by having its powers reduced to just the ability to fire off combat magic, and that’s kind of fair; when a character has a lot of utility effects in 3rd edition, if they were all gone and left only the combat stuff behind in 4th edition, it’d definitely be a limitation in scope.

The problem of course is that wizards lost none of their utility nonsense, and that utility nonsense was made more available to more characters, because if it wasn’t a combat effect, it was folded into the space of rituals. 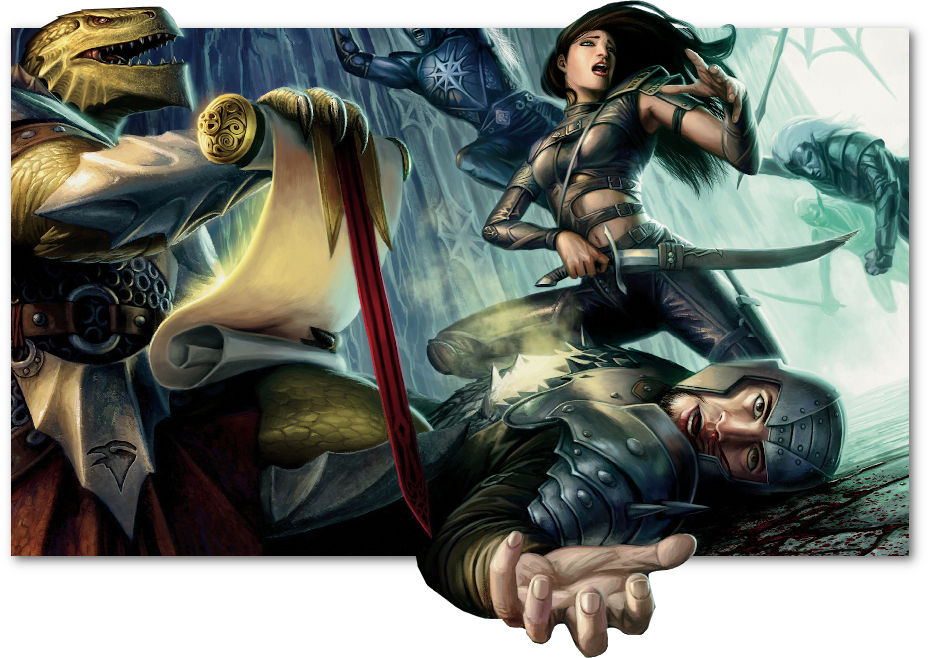 Rituals are basically spells, but they’re spells that are too complicated and time consuming to perform in combat, and give you a kind of effect that the game doesn’t want you to just dump anywhere, at any time, for free. This was one of the problems with 3rd edition magical effects; some of them made major, common impediments to plots into trivial actions that a player character could renewably blast through – things like Speak to Dead and Teleport Without Error aren’t utility effects for combat, but are just plot-busters.

In 4e, all of these utility effects are created not as magical items that let you do the utility effects (as many of them became in 3rd, with scrolls and wands occupying the ‘nice but rarely needed’ spell slots), but rather as a straight up exchange for something your character can do, with the right components and a book. It’s great, honestly, since back in 3rd edition, as builds evolved over time, players would eventually just get in the habit of keeping cash on hand to pay the local cleric or wizard or whatever to cast the spell they needed for whatever inconvenient bullshit they were dealing with.

How do they work?

Basically, you can either buy a ritual scroll, which is a one-off, purchaseable version that needs no expertise. You need the effect once and you don’t imagine you’ll have value out of getting it regularly, so you buy the ritual scroll and go for it. Anyone can do that.

But if you want to do the effect multiple times, it’s cheaper (long term) to take the Ritual Caster feat, and transcribe that scroll into your ritual book. That means it’s mastered. And when it’s mastered, you can do it any time you want by expending components.

Okay, okay, components, that’s the next thing, what’s that mean. Well, there’s a generic purchaseable thing called ‘components’ for each skill. You spend gold on buying a quantity of Components, and then you use those components to do the rituals when you need to.

This turns these things into an expendable resource, something you can’t just overuse to solve every problem, but as you level up, they become more affordable, and you start being able to spend a small quantity of this resource on making some problems go away. Knock costs 35 gp and a healing surge – meaning that at the low level, the gold is a serious cost, at high level the healing surge is. But it also means that you can play a character who spends, by mid level, spare change on the magical effects that, in 3rd edition, you’d never use because to use them would involve spending a spell slot – something that’s really valuable.

Plus, as with a lot of things in 4th edition, this opens up a lot of character options. Let’s say you want to play a fighter who’s learned a trick or two from mages. Then you can take the Ritual Caster feat – in combat, you’re still a knuckle-dusting badass who uses swords and axes and shields and whatnot, you didn’t become a wizard – but now you know how to magically undo a lock, or create an illusion. Same thing with a rogue, who can complement their thievery with teleportation rituals!

There’s also the Martial Practices system, which adds Ritual Like Effects to the non-magical characters – stuff that definitely should take some time and effort to do, but shouldn’t need to be done by a wizard in a pointy hat.

I really like the ritual system! It’s one of those super neat components of 4th Edition that’s been seemingly rendered invisible in a sea of bad faith arguments, and that’s a damn shame.