Back once more unto D&D 3.5, back to talk about something really goofy and one of those areas the rules don’t quite work, and let you do something pretty cool, if you’re willing to ease off the gas.

Look, Wild Shape is a broken class feature. It’s so broken that I wound up kiboshing it wholesale in my games, stripping it away from the Druid and leaving the Druid as merely a full-spellcasting powerhouse with armour and weapons and cool stuff as well and a badass pet. Wild Shape has the same problem as any – every – shapeshifting power: The thing that makes it good is infinitely expandable.

Still, there is one space for Wild Shape where it’s just the central power of a character, basically all you can do, and doesn’t involve a lot of extra weird stuff going on, extra stuff you need to pay attention to that split your focus and make it hard to concentrate on doing what you want to do with a character: The Wildshaping Ranger. 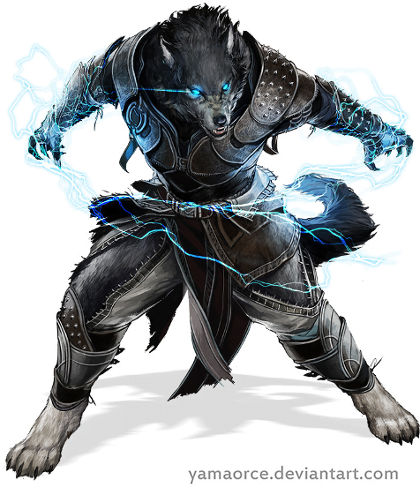 The Ranger is nobody’s first port of call for broken stuff. It has class features that seem to line up behind Slightly Worse versions of existing classes: The animal companion of the druids, the bonus feats of the fighter, the survival toolset of the Barbarian, all scaled down a touch. Still, Track as a bonus feat, that’s nice. It’s one of the most fundamentally fair classes by base – even if you want to do the Most Rangery Ranger, you needed all your stats to be pretty good.

This however, is a build that takes that Slightly Worse option and turbocharges it.

This Ranger discards the power of the Improved Combat styles and instead picks up Wild Shape. At level 5, this is a cute utility thing you can do once a day for five hours, and the next level, you become a Master of Many Forms, getting two wildshapes for six hours and at that point you can basically live in your form as a bear, except now you’re on the rollercoaster of busted animal stuff. You can shapeshift into a bunch of stuff, and at level 7, you get access to the extraordinary abilities of things you shapeshift into – which is a host of really strong powers!

You can get feats like Multiattack, Improved Natural Attack, and a host of Wild Shape feats as well. None of the choices are essential, though! You can even go for a wildshape form that has hands and wield a two-handed weapon as like, a gorilla! You can go hardcore grappling with big forms! You can turn into something small and sneaky, you can turn into something monstrous and terrifying – and it’s all at your fingertips on this character who, when the powers don’t work at all, has a good base attack bonus, good hit points, and an animal companion.

This is also a great melee beat-stick to play if you want a lot of skills, want a toolbox of toys to play with, but also don’t want to reach out into the depth of the spellcasting.

This one’s a bit woolier than before: Because you need to be familiar with the animal forms you take. And the rules have literally no description for what that means. It’s not a balancing rule – the game has literally no way to explain this. Still, it’s worthwhile knowing about this and being prepared with the creatures you want to turn into. You can go bananas if you want, but remember you’re talking about communication: You want to talk to your DM about the forms you’d like to use, and make sure you don’t catch them flat-footed with something.

Also, see that there – the Warshaper? It’s a … contentious one. If you just skip through it, it looks pretty reasonable; it improves the natural attacks of a form, gives you more strength and con, immunity to crits and stun, fast healing – all nice, but nothing ridiculous. Right?

Except it doesn’t specify how many extra attacks you can give a form.

The rules for adding attacks to a creature are pretty ambiguous with the best, safest interpretation I can find being: a creature has a limited set of them, limited to one claw per limb, one gore, one bite, one wing baffle (regardless of number of wings), two slams (for no discernable reason, there are just some monsters with two slams), and … tentacles.

Tentacles are where it gets weird: There seems to be no limit on those.

Personally, I’d talk to my DM about it, and if they said ‘no, bugger off with that nonsense’ I’d be fine with it just being a bonus size category for my natural attacks. If the DM was okay with it, too, I might be able to visualise adding a gore and slam to some creature, but this is very discretionary. Talk to your DM about it and make it clear this is a rules hole. They’re going to need to make a call about it.