We’ve spoken before about how the wizard and sorcerer presented a sort of top-and-bottom of the top tier of D&D 3.5’s utterly unbalanced nonsense space, and it’s something of a storied matter of lore that the Fighter represents a most obvious terrible class. It creates a pretty simple narrative that spellcasters are great and melee damage dealers are ass. This isn’t totally right – after all, the Truenamer, the worst D&D class, period, is a spellcaster, and there are classes that are primarily melee damage dealers that aren’t underpowered compared to standard enemy content.

But it does hold, generally.

The core rules brought with it a set of three arcane casters and four divine spellcasters. Of those divine spellcasters, two were what we call ‘full’ spellcasters – they cast spells at level 1, and every level their spells get better – and were the Druid and the Cleric, two of the most stupidly powerful classes in the game. The other two were the Paladin and the Ranger, who had a pretty interesting structure; both were full-base attack bonus classes, with special abilities that made them better in melee combat, and after level 4, they started to get a small number of spells that gave them a lot of potential options. And honestly, the Ranger and Paladin were pretty damn good. They weren’t the worldshakers that the primary spellcasters could be, but if you wanted to hang in their parties, you were at least going to get interesting choices and could do some cool things.

But what if there was an arcane class that was templated off the Paladin and the Ranger?

What if there was a melee-capable class that got arcane magic and special powers to round out their flavour space?

Presented in the Complete Warrior, we got our Arcane Paladin-Ranger-type.

It was the Hexblade. 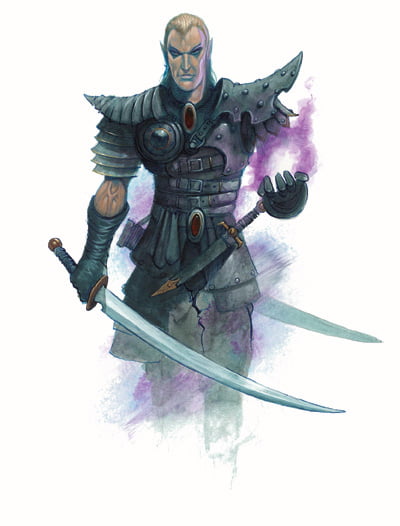 The Hexblade is iconically, a sort of deliberately ‘dark’ character role, in the same way as the Warlock was back in 3.5, unable to be ‘lawful good.’ You got a full base attack bonus, one good saving throw, a bunch of special abilities, and a collection of spells. At base, the Hexblade looks a bit like a Ranger, or a Paladin-like. They get to cast some spells, though they’re limited to light armour or they start suffering ‘arcane spell failure’ —

And by the way, Arcane Spell Failure is the dumbest system of that edition. Nobody I ever saw in years of playing ever rolled those percent dice. Wizards just skipped armour and used all the broken toys they had instead of risking 15% of their spells in the name of wearing a chain shirt. Ugh. Anyway.

— the Hexblade’s defining feature was the Hexblade’s Curse. This power meant that you could impose a -2 to hit, damage, saves and checks to a single enemy.

If they were in range.

If they failed the save.

By comparison, this is meant to compare to the Ranger’s Favoured Weapon, and Track, and Wild Empathy – which gives you a +2 bonus to damage rolls against every enemy in your chosen enemy group. It’s got to compare to the Paladin’s Smite, which is a +Charisma to hit, +level to damage attack. And again, enemies can make a save against it. And this sort of sets the tone for the Hexblade.

Then at level 2, the Hexblade gets something like Divine Grace, a feature that Paladins get, except it’s more limited, against spells and spell-like abilities only. At level 3, they get Mettle – which gives you a bonus on successful saves against Fort and Will stuff, which is complicated by the lack of good saving throws in the class. But okay, sure. You get spells, and an aura that lets you get a 20% miss chance against melee attacks, which at level 10 has to compare to the level 3 wizard spell Blink that gives a 50% miss chance that they’ve had since level 5.

At level 7, your curse becomes a -4, to again, a single target, and again, they can save against it. At this point, you can do it twice a day. Twice a day. And again: Your enemies can save against it. At level 7, assuming an 18 charisma (which… you aren’t going to have), your curse save DC will be 17, which at level 7, monsters with a bad will saving throw will beat on an 11. So against a soft target your two curses a day have a half chance of working. At level 20, 20, your curse is a -6, and you can use it, by that point, 5 times a day.

Everything you has sucks, and you don’t get enough of it. The food is terrible and in tiny portions. 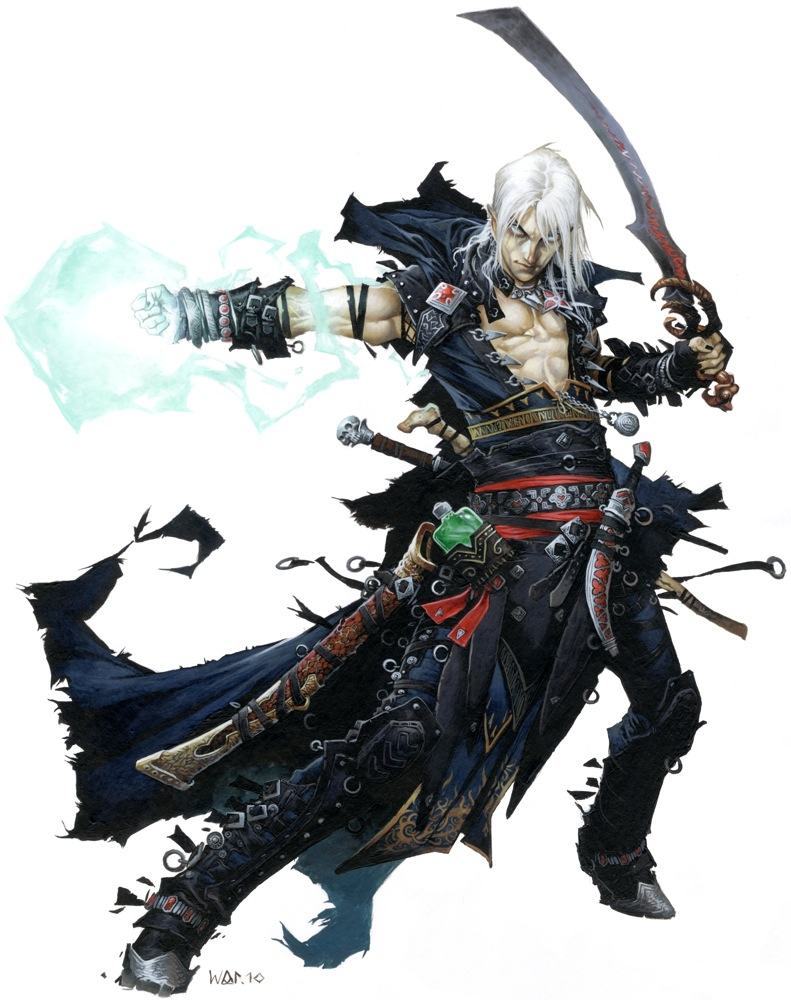 Okay, so why does this suck ass? Well, we know why. The designers were cautious about it, because they didn’t want to risk making an overpowered class. They were afraid an armoured character who could cast spells and attack with weapons and pick up melee combat feats would be overpowered, and they were right, but that character was the Cleric, and they’d already released it a year ago.

The fear was, it seems, that the Hexblade would be too strong with all the different things it could do. Armour and melee feats and spellcasting and curse special abilities, all those things working together, except the thing is, every single one of those choices required you to invest in it. You had to buy the armour, you had to build your spellcasting options, you had to pick from your spell list (because you cast like a sorcerer), and you had to support your curse by reducing enemy saves (if you could), and hope your curses could support your spells. And then, when the time came to fight – well, you could make a full attack, using your whole turn, or you could move and cast a spell – and most of your spells weren’t good. And all of this is ignoring that you have, at level 20, a total of five curses a day and enemies could save against it.

Every part of this class is carefully positioned to be weaker than its nearest comparison, everything made to be a wound down and scaled back not from the top tier of power, but from even the existing standards that stand alongside it. And that was because it was seen as dangerous to be able to choose one of any number of options, so every one of those options had to be markedly worse than the default source for those options. A character who can do half of a spell or half of an attack is seen as just as dangerous as one character who can do all of either, which isn’t how things work when you’re making choices about what to do in battle at the time.

Basically, the lesson of the Hexblade is a lesson 3.5 took a long time to learn: That the most valuable resource on a battlefield is always time.

There is an improvement on the class, but then I’d have to mention Mike Mearls, and well, fuck that guy.