Back in D&D 3.5’s hey-day, which was, it seems to look at these printing dates, 2003, they were so convinced of their infinite expandability and the depth of their market that they made themselves a special label warning that this book was of the Mature Line of products. In the time of this line’s existence, as best I can tell, there were a total of two books Wizards of the Coast published on it, with the first being the perhaps obvious Book of Vile Darkness.

The most obvious joke, ‘vile dorkness,’ writes itself, and is 100% justified.

The other book in this line, though, is the Book of Exalted Deeds. This book got to be Mature because… of… reasons, most of which seemed to be to add a few dollars to its sticker price and, I suppose, to let it reference the Book of Vile Darkness, which it felt a need to do. Now, there’s a lot to be said about the difficulty of composing a book whose entire foyer has to be a treatise on how to not only ‘be good’ but also be really good in these proactive ways that translate to good game mechanics and engaging character beats for an ongoing story. You can really feel the front end of this book trying to park a bus in a bike spot, as it seeks to bring up things that are good things for a character to do, in a proactive and engaging way, while still buying into the slightly mangled moral framework of D&D as she is written.

You’re basically being asked to care about ‘showing mercy’ and ‘redeeming evil’ while also ‘killing evil things.’ The Book of Vile Darkness has this conundrum as well, but since it’s meant to be a book for villains, and is ultimately, deep as a tea spoon, it doesn’t hit the same way. 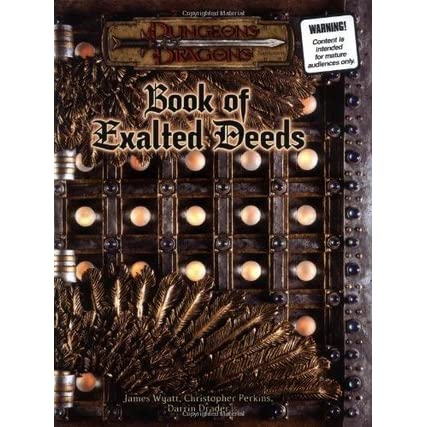 This book’s place in smooch month is, however, because of its particularly weird relationship to that sticker on the front. See, that label is for ‘mature content.’ That means that this book can include smoochy content, or maybe even raunchy content.

Did it do anything with it?

Oh goodness, no, not at all.

This book sets itself up to talk about ‘adult themes,’ but then, because it isn’t really in a good head space to talk about things that might land in that space like, say, sex worker paladins or proactive uses for sex to improve people’s lives. Instead, what you get is the occasional mention, the vague allusion which is weird if you bothered to make the sticker.

It’s fascinating in hindsight, where this book is given free reign to talk about sexy things, but doesn’t have any ideas for that. And while that’s kinda a good thing – we don’t need Paladins Who Cure Things With Their Genitals (at least, written by these people) – it’s still a little jarring to realise that there’s this entire wing of content that we normally leave alone for cultural reasons that, when given freedom to address, this book kind of left alone entirely.

Now, honestly, this is kind of mean anyway, because this book is pretty much just a splatbook of player options with a special ‘hard mode’ toggle on them so the DM can decide whether or not they want to have a 40 minute argument on morality and atonement at the table. It’s just this is one of those ways that these games trip and fall over a thousand brooms with their subject material, because it’s not like fantasy narratives aren’t full of smooches and sex and breeding (like, where do all the half-orcs come from, and don’t give me that reason, you stupid assholes). The entire genre this game is trying to emulate has all sorts of things in it, that require an awareness of and a cultural willingness to recognise sex, sexuality, bonding, love and romance, and here, in this book…

The Book of Vile Darkness has an entry that usinge bondage devices – at all – is an evil act. The closest this book comes to that kind of moral coding is to imply that furries are holy. Which is weird, because there’s a conventional counterpoint that classic fantasy can easily claim – chastity – that they could have mentioned, but I guess nobody wanted to work out how a cage impacts your detailed encumbrance rules.

It’s interesting though because when talking about smooch month, I thought I might have a lot of possible options for D&D. But… surprisingly, I don’t. It’s a thing that the rulebooks I bought avoided mentioning, with good reason, based on how Ed Greenwood has spoken about his settings.

They made a sticker!