Now, while I may be on the record saying that Dungeons & Dragons can do horror scenarios, doesn’t mean I necessarily agree with the way that the default books angled towards horror. One can point to the ‘mature’ Book of Vile Darkness (more like vile dorkness, boom, gottem) that tries to be shocking and edgy and it’s just kind of insulting and basic. But the BoVD wasn’t the only book of its type that tried to be creepy and horrifying, nor was it one that strived to be mature.

For example, the Fiend Folio is the only book I own with nipples.

This book is also trying to cover a lot of bases, with some artists getting quite a lot of work which I feel, though can’t say for sure, is a product of some artists being very productive in a short period of time and that being used by the art director. Like Thom M Baxa, who produced a bunch of work in this book which is meant to represent a lot of different things but mostly just seems to represent Just Thom M Baxa’s work. 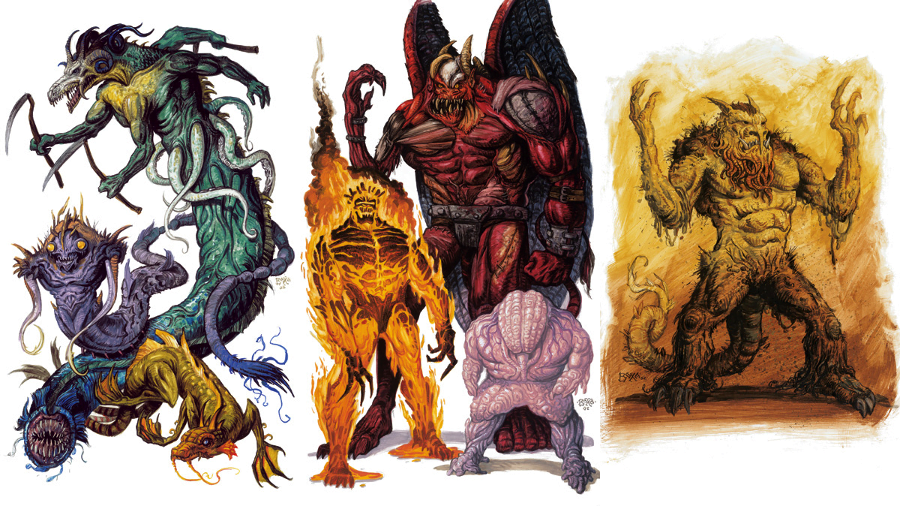 Still, it’s not that this particular book is a total dud. It’s just that it’s a book that struggles against a lot of needs; it was the first monster book printed with the at the time unreleased 3.5 system, it had to be backwards compatible without it being deeply confusing, it couldn’t give away too much with the new rules. It was also drawing together a bunch of disparate sources, filling in old 2nd edition things that hadn’t been printed in 3rd edition, and yet also trying to carry its own general theme of being a book of, well, fiends, a term that was kinda associated with demons and devils, suggesting outsiders.

But I’m not here to talk to you about the problems in the Fiend Folio.

I’m here to talk to you about the Kaorti. 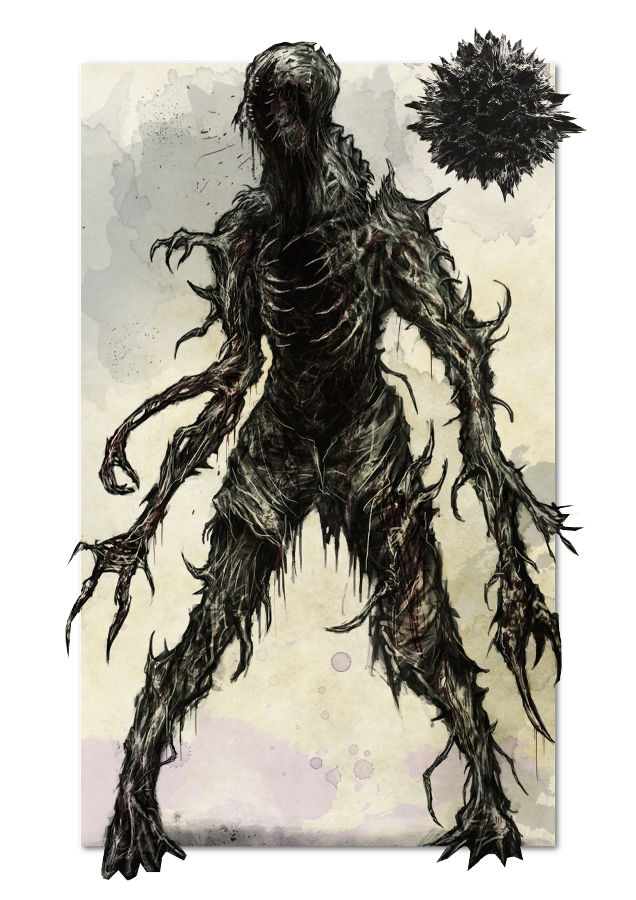 The original art for the Kaorti in the Fiend Folio is really tiny and really indistinct, so here, Pinterest tells me this picture is from the 5e Kaorti. Doesn’t matter, the look is pretty similar. If you know the artist for this one, let me know, because pinterest is not always good for sourcing.

The Kaorti were, as best I can find, a race of Far Realm humanoids, created for the Fiend Folio itself, and they came along at an opportune moment where the book needed something to hold it together, to touch on the idea of the Far Realms, and the Daelkyr of Eberron were a year away from their arrival and complete eating of the Kaorti’s lunch.

The Kaorti were a horror monster race, but they weren’t horror in the model of your Dante-inspired divine hells nor even your Lovecraftian horror that was rising in the culture. No, they were Gigeresque horror, humanoid and identifiably so in their origin, but covered in think, oily resinous shapes, covering and conforming to the body in unsettling ways, armed with weapons that weren’t heavy and powerful but sinous and threatening. The Alien parallel wasn’t just in the visual aesthetic, either: The Kaorti were a coalition of smart wizards, convinced they could explore and exploit something truly new, in the Far Realm, and warped themselves there, only to immediately lose and be turned into something horrible and new.

They are monsters of hubris, horrible and terrifying and moist.

What I love about the Kaorti, and why I’m a tiny bit sad they basically exist as this one, fifteen year old shard in a book, is that they’re horrible in a way that largely didn’t exist before, and until the Daelkyr, didn’t ever get really explored.

Now, nowadays, the Far Realm is a lot more blatantly Lovecraftian than it was back then, and the D20 Call of Cthulhu license had only been about half a year in motion when this book came out. This meant that while there’s certainly some invocation of the general terribleness of The Far Realm, it’s not really as specifically nudge-nudge-wink-wink to the specific visions of the Lovecraftian mythos, about the fundamentals of what a monster can be than it is these days.

And this is where we get two of my favourite Kaorti-adjacent things; their aberrations, the Rukayr and the Skybleeder. 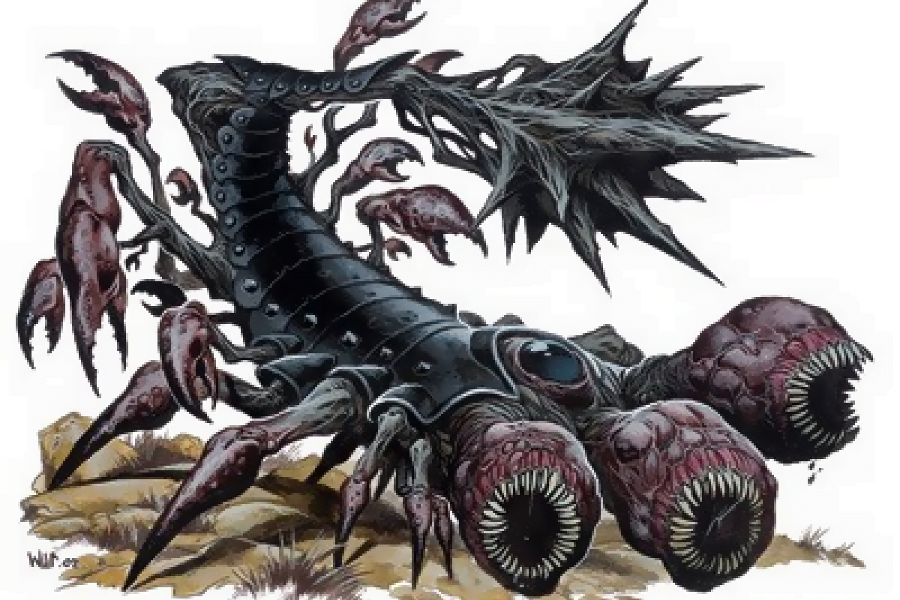 The Rukanyr is a great big collection of what happens when you half-describe a scorpion to Wayne Reynolds, leave a few details out and let him fill in the blanks you left behind, but still manages to carry on the general horribleness of what a scorpion is not. It’s basically a big armoured tank of a monster, and it has a bunch of bad mechanics (multi-turn AOE stuns are just a bad idea) but the overall impact of just showing people the art set the tone right. 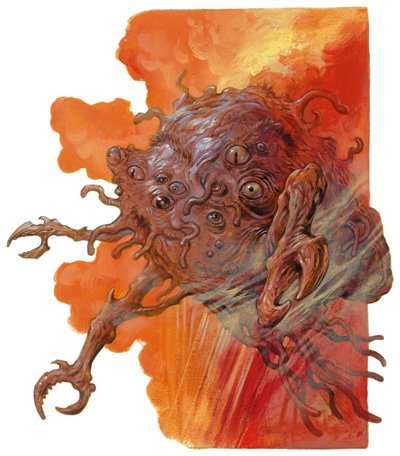 The Skybleeder, by comparison, is almost too sensibly in its awfulness – it’s a sac of meat that floats and is covered in eyes and claws. But these two monsters are also described as having an actual capacity for sadism, borne out of trying to execute on the Kaorti’s wishes, because the Kaorti hate reality.

They hate reality and they want to feed it into the Far Realm, using its inevitable end as a sort of apotheosis. The Kaorti are a priviliged, corrupted nihilism, an evil idea that has scored the brain and results in becoming something inhuman. Where the Alien of Alien may be the most obvious mpreg horror fantasy ever, the Kaorti are what if the smartest people in the world decided that existence was so awful, the only option was to end all reality and they could make people agree with them.

The Kaorti are a little plot spur, a lost little tidbit of a world that has forgotten about them – which in a way is what they’d want, to constantly beaver away in old abandoned mines and forgotten pathways, feeding the world into nothingness, a little at a time.