Before I go on to bang about something big and complicated in this book, I want to note, up front, that this book has Wraithstrike, one of my favourite 3.5 D&D spells, and which introduced the idea of spellcasters spending spell slots for short-term, immediate impact in combat, something I love and which always thrilled me when I got to play with it. If I only got this book for that one category of spell, I’d be pretty okay with it.

Going back through my old 3.5 books is sometimes an exercise in wondering, in hindsight, just what exactly justified the book’s cost. At the time I was actively playing 3.5 D&D, the books were purchaseable research tools, things to leaf through and read and cross-reference. It was like getting a complex box of lego, and you could share your creations with other people.

Most of these books, I look at the spines and I have a warm thought or two. It tends to be something like oh yeah, remember how this lets you do that or that. Most any given book has an absolute dogshit class, one really embarrassingly weak thing, and one really busted thing in it. There’s always some stuff that’s, you know, decent, or stuff that becomes decent when you know what you’re doing. Basically, these books were themselves, even if never used to build a character, fun to play with.

Sometimes you’d find a book that had in it something that resisted play. Something with an obvious allure to it, but something that was hard to see how to make it work. These were often a bit like Finger Traps, kind of like Rubiks Cubes – puzzles where the impracticality of solving them was the point. Character options that asked an interesting question.

For the Complete Adventurer, the question was the Fochlucan Lyrist. 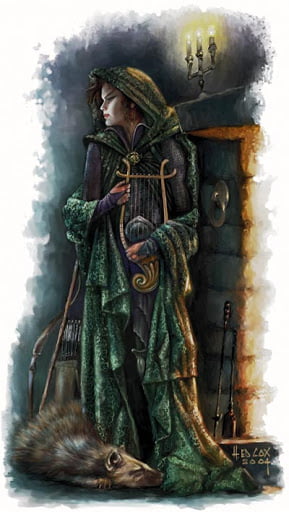 Mostly, prestige classes in 3.5 are designed to make entry into the  class take a portion, but not a majority, of your choices as a player character. The point was to limit and focus you, but not demand a single specific build. What you got in return was, usually, a more specific version of a comparable class, with usually mechanics specialised to fulfill your needs to pursue the way that concept worked.

Typically, this meant that prestige classes either did very little but gave you a more specific version of a fantasy (Shadowdancer), patched together two classes that didn’t work well together otherwise (Geomancer or Eldritch Knight), or focused a character’s existing power in a way that made them more powerful (Incantatrix). The vast majority of prestige classes were in the first section, most of my favourites in the second, and the ones I wound up using because they’re obviously optimal for most games in the third. I will always favour a Daggerspell or Bladesinger before I sigh and bust out the Mage of the Arcane Order.

When you look at prestige classes, the first thing you usually see is the Class table. That is, a big panel that isn’t part of the text that sits up and gives you a list of the things that the character will be able to do to progress over time, and the Lyrists is eyepopping.

This is a package you don’t see in many places! This is a lot of stuff! And then the requirements are similarly eyewatering:

This is an absolute platter of things you need. By comparison, if you just flip a few pages on to the next prestige class, the – I’m not joking – Ghost Faced Killer, that class needs a Base Attack Bonus of 5, four skills at a range of values between 8 and 4, an evil alignment, and two perfectly acceptable feats. That is to say, you can get into the Ghost Faced Killer at level 5, but it will ask you to make some skill choices. And remember, characters kinda cap out at 20 and most campaigns don’t get there. So a Lyrist starts at 10 and if you’re getting into it, that’s kind of where you live for the rest of the game.

The return is huge!

But that set of limitations is pretty eyewatering. And I mean it – Evasion is hard to get. Bardic Knowledge is limited, too, and the Druidic requirement can be very easy (if your DM has a naturalistic view of linguistics) or very hard (if it’s something ‘special’). It set off a sort of aggregate research project for people, to see if there was some way, somehow to overcome the limitations of these requirements.

Skill ranks are absolute – the game has literally nothing I know of that lets you circumvent those limits. So you have to find a way to cook the levels before level 10 to hit target numbers. The simplest version of it seems to be Rogue 2, Bard 3, Druid 5 – an ugly arrangement of levels, but the skills should sort out reasonably well. That gets you, at the end, druid spellcasting at level 15, bardic at level 13. In both cases, this cuts you off from top-level casting in those classes. That sucks, a bit.

That seems to be how you’re ‘supposed’ to become a Lyrist. That’s the baseline.

Another oddball option is Ranger 9/Bard 2, in which case you do get uh, spellcasting as a 18th level ranger, an 11th level bard, and … sure? That’s interesting? But it’s definitely not the kind of juggernaut power that the Lyrist implies with the numbers it presents.

There are some prestige classes that get Evasion, like the Shadowdancer, and the Divine Oracle gets something the rules describe as as evasion, but. Some might rule that’s good enough, but some might not. Similarly, the Loremaster has an ability that functions as bardic knowledge, but. You could, with the right permissive DM stitch those together. There’s even a prestige class that gets access to evasion and full spellcasting and is reasonably easy to get into.

We’ve spoken about it before.

As you start building this ever more complicated web of connected mechanical material to try and make this build work, the more you start to consider whether or not the complexity and constraint is worth it. Just how hard is the target the Lyrist presents something you want to hit? What is it about the class you want to play? And usually, you can get there with something less constrained and where the build blossoms into doing cool stuff much earlier than level 15 or so. This means the Lyrist tends to not be seen as a character choice as much as it is a complex problem designed to lure in players like me, to play with the rules and never do anything else with it.