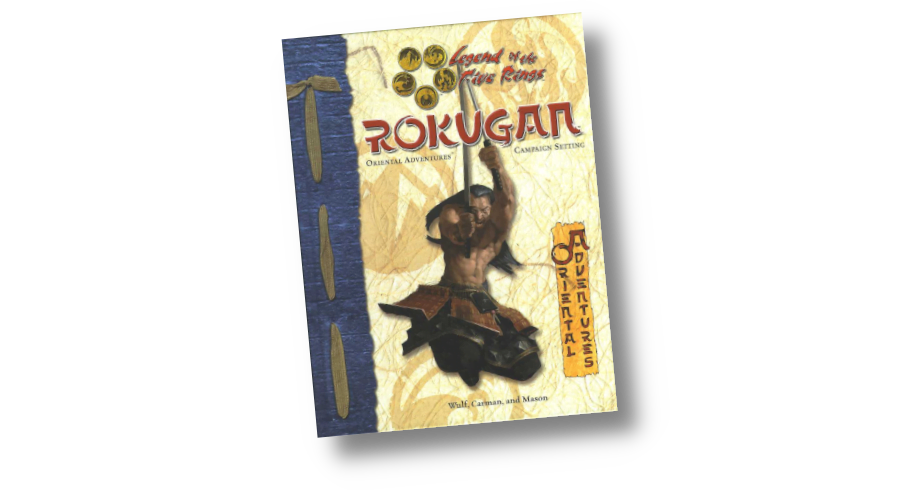 This doesn’t sound like the kind of disclaimer one might imagine is necessary for me, even if I am typically seen as pretty negative about my D&D sourcebooks that I own and paid money for and have never tried to get rid of and frequently fondly reminisce about. The issue is that this is a book that is right now mostly notable because it, or the setting it’s talking about, or the whole general space of Rokugan and Oriental Adventures is central to a conversation about Orientalism.

The simplest version of Orientalism is ‘treating people from every part of the world east of say, Germany, as strange and exotic people with mysterious, impossible to understand minds.’ It’s racism, but it’s racism specifically as it relates to the vision of an enormous stretch of the world that reaches from pretty much, usually, say, Turkey, all the way over to the far side of Japan, a geographic region that as far as my limited mathematical skills present to me represents more than half of all people, and therefore, really, probably gets to set the idea of ‘average’ and ‘normal’ in a big sense.

I am not going to directly or meaningfully engage with the Orientalism present in this work. Oh, there’s going to be a little touch around the edges, because I doubt I can resist making a joke or two, but I don’t intend to make this about the Orientalism of the Rokugan book. I’m a white guy, and I don’t really think I have the tools to bring to bear on this work how the Orientalism plays into every facet of it, particularly because I don’t feel like I have good reparative suggestions. When I delve into game design like this, I feel that if I can just say don’t do the things this book is doing, I’m presenting half the job, and while that can be fun, this feels like a topic that doesn’t need that.

I don’t think the solution to Orientalism in TTRPG books is to burn the project down. I don’t think D&D, for example, gets better, if fewer creators of colour make their own versions of things in the system. I think, ideally, the solution is for the work to be dismantled, and for something better to be put in its place. There’s nothing inherently wrong with wanting an Asian fantasy setting that lets players play Mongolian-inspired, Japanese-inspired, Chinese-inspired (and god there are so many categories that could cover), Tibetan-inspired, Indian-inspired, and all the spaces I’m not covering when I describe the portion of the world that contains half of all the people. I do think, however, the solutions for how to render that space if you’re the only game in town with the resources at the scale of Wizards of the Coast, hire those people. In that spirit, I’m not going to try and do a detailed breakdown of The Ways This Book is Orientalist or any such thing as that.

Still, it is not something I can leave uncommented on for two basic reasons:

If I try to leave Orientalism out of the conversation about Rokugan, the specific book, it would involve contorting what I’m saying, and it would involve creating the impression, however indirect, that the problems presented by this book aren’t here.

Let me make it very clear; this book is, in the kindest possible interpretation, an Orientalist work created by a body of largely privilege-entrenched white people, primarily sourcing their work off other privilege-entrenched white people. It is racism in the most congenial gentle slope of racism, the racism that tells you that it’s not racist racist, it comes from a place of love, it was a different time, it was just a legacy issue, and so on and so forth. Racism and its machinery is a self-replicating machine and part of how it replicates is by ensuring that any change for the better is done in the least helpful way, and one of the ways that happens is we make excuses for things we love.

I love some stuff in the Rokugan book and the subsequent books made about it.

But, I need to make sure you understand this book is Orientalist as hell. 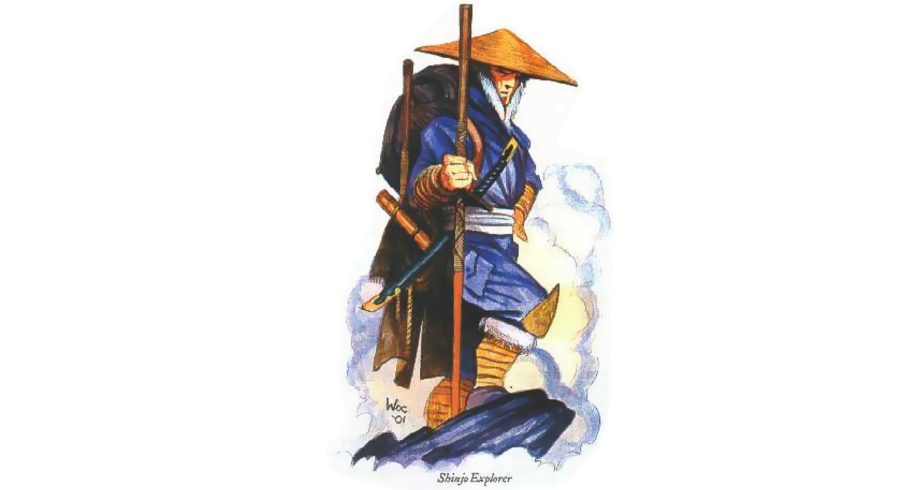 Okay, this isn’t the book Oriental Adventures, which was written by Gary Gygax, David Cook and Francois Marcela-Froideval in 1985. Nor is this book the book Oriental Adventures, written by Jeff Grubb in 2001. This book is Rokugan – Oriental Adventures, which is a D&D sourcebook, published in 2001-ish under the 3rd edition rules, written by Shawn Carman, Seth Mason, and Rich Wulf. Rather than building on the existing Madeupbyawhiteguyigan setting of Kara-Tur, this book used the Legend of the Five Rings setting called Rokugan, from the original Googletranslatanese for ‘Emerald Land,’ created by John Zinser, Dave Seay, Dave Williams, and John Wick (not that one). Now I’m not getting all chromosomal, but these names may scream out to you that they are largely not deeply steeped in the cultures they’re trying to reflect. And that kind of bears out when you look at their other, related works.

For the most part, this work is created by a bunch of seasoned experts in writing other books published by AEG and Wizards Of the Coast. Jeff Grubb alone made a bunch of great books for 3rd edition, including the Manual of the Planes and contributions to Monster Manual II. The only reason Rokugan was the setting for this Oriental Adventures book space, and the subsequent release of a host of AEG-published D&D books for this hybrid of AEG’s L5R setting and Wizards’ d20 mechanics., was because at the time, Wizards had acquired the rights to publish l5R content. It was a business flex, and it was exploratory, and

excellent in the ways it could be excellent.

I think at its heart, because it was presenting a handful of designers who had no reason to hold deep love in their heart for how D&D worked, but also were already system-oriented and problem solvery to begin with, with the question of translating a complex lore space they already knew into a mechanical system that was extremely flexible and under-explored. Essentially, in this book, a bunch of people who were quite good at creating rule content were air-dropped into a wide open rules space and told, more or less, to go ham.

They were given the assignment, based on business movements, and they were creating in a space where they wanted to try and hit their own flavour, using a rules system that was designed to be easy to expand. 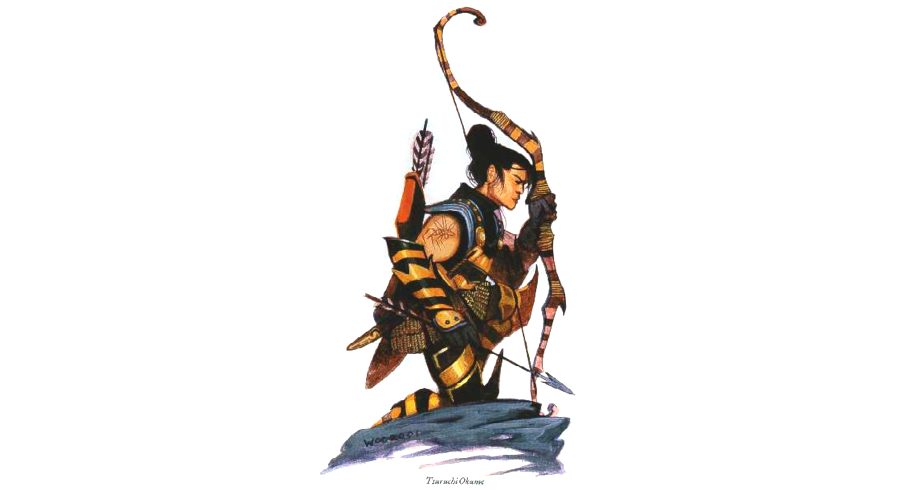 There are two major components of this book that are expanded in the sourcebooks AEG released, and let me be clear, so many of these rulebooks are bangers. The 3rd edition system as it stands is full of problems, but if you’re still using it, or considering it, or building on it right now, it’s because you are picking and choosing system elements to keep using. If you’re in that space, if you’re using a 3rd edition adjacent game that can reprocess existing useful material, then you should check out this entire well of resources.

There are three useful lessons to glean from this single Rokugan sourcebook:

This is, shamefully, the reason why I bought this book when I did, years ago. Because the feat support in this book was an entire division of extra, additional mechanics that looked at the characters that primarily used feats.

Now, part of this was also that the existing framework of Rokugan, as a setting, was one where magic users are rare, and the work of magic isn’t something you just, like, bust out all the time; the Shugenja communes with spirits and their entire magical ouvre is more like communicating with a rare force that, even if mechanically available all the time, isn’t going to leap out of your fingers like a pump-action shotgun all the time. That meant that if you were going to give people options, the Fighter and Samurai need to look different to one another, because you might wind up with a party where a few people have levels of those two classes. With that in mind, if there’s only two or three choices worth taking for those classes, things get boring fast.

Instead, the Rokugan book took the space presented by the Fighter and Samurai and their need for combat abilities, and built off in their own directions. Part of this was the way the clans shaped things; some clans were about being tough, some about being aggressive, some were archers, and some were duelists, and all that created empty space for feats to fill. But good options for the fighter weren’t going to address the catastrophic power imbalance unless there was also…

The Murder of Darlings

One of the lines that Eberron drew, when it became a D&D setting, was the premise that everything in D&D has a space in Eberron, which is a good principle for positive, inclusive design. But Eberron did so and invited in all the mechanical problems that came with baseline Dungeons and Dragons. Rokugan, on the other hand, has a passage, on page 29, which junks, from the baseline version of  these campaigns, the Bard, The Cleric, the Paladin, Wizard, and then clamps down on your options for the Sorcerer and Druid. That is to say, of the core problem classes, in the 3.0 rulebook, it kicks two out and clamps down on the remaining two. It also icks the Bard and Paladin, who, back in 3rd edition, were uh

This is surprising in hindsight, but really, if you have a poisoned root in your design, just get rid of it. You don’t need the wizard. The setting did clearly have a handle on the idea that the Wizard was too good, because it was just gone. The closest thing you have to a replacement to the Wizard was the Shugenja – which was, largely, fine, and part of how it was fine was a much more tightly controlled spell list.

And then, finishing those up…

Here’s one of those things where Orientalism is the thing that this fish swims in. Because one of the things that this setting book does amazingly well is convey to you the simplified, broad stroke characterisation of the eleven-ish clans of Rokugan, and it does so by showing you archetypal values. And this is where that Orientalism is used: Because it can tell you that the Crab clan are hard and bitter defenders of an enormous wall (and that inspires ideas), that the Crane clan are elegant and courtly poetry nerds who weaponise smugness (and that inspires idea) and the Lion clan are militarised in a way that means they have amongst other things, no spies (and that inspires ideas).

And this is one of the reasons you can’t turn away from the Orientalism here. Because at its root, this is something that you do want: You want to present players with a handful of meaningful, easily grasped, culturally connected elements of the game world they can interact with.

But the tool that this uses is the inscrutable simplified archetype of a bunch of half-chewed tropes. I don’t want that. I want a vibrant, intricate, excellent set of onramps that I know are going to come from authentic visions of these cultural groups, I don’t want the funhouse mirror version that the gamebook presents.

Don’t know what to tell ya.