Back during August, I looked at the Tome of Magic, a 3.5 D&D book, which involved looking at the the Binder. The Binder was one of the classes presented in that book, where the basic idea was that the binder had these things, called Vestiges, that you could sort of cold-swap between to get different abilities based on your different needs; the task of swapping character mode was fast enough that you could do it between encounters, or on the far side of a dungeon door, or hurriedly while the guards are on their way, but it wasn’t something you could hot-plug in between combats. The Binder was a weak character class by default that could, with its variety of options, hot-swap into a form that was usually about as good as a rogue with most of the gear they want.

When it comes to D&D content, Wizards put things in the books, but they also made a thing of web expansions – pdfs and website content that you could add to your game, stuff that came from the Official Source and was generally made to be safe enough to include in any game, and that is where we got the Vestige that on its own takes the Binder from ‘incredibly fair, even a bit weak’ to the upper tiers of power, brushing in the shadow of the wizard and cleric.

And bonus, that Vestige is spooky. 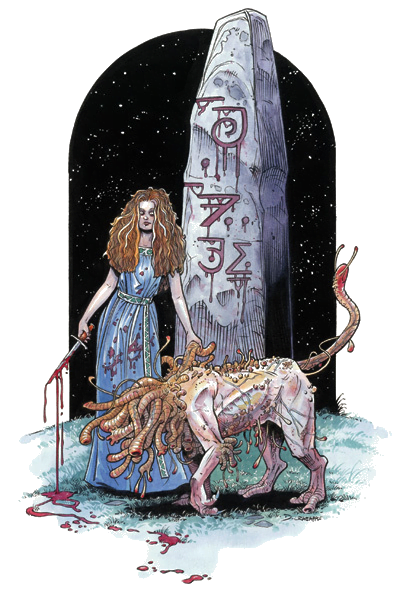 The actual text of the Vestige of Zceryll, from Wizards’ own web expansion, is pretty simple:

Zceryll was a mortal sorceress who communed with alien powers from the far realm. She became obsessed with immortality, seeking out the alien beings in the hopes of learning their eternal secrets. When she died, she became a hideously twisted vestige, forever seeking to re-enter the Realms via numerous artifacts she dispersed across the world. Zceryll grants you the ability to transform your body and mind into an alien form, granting you telepathy, resistance to effects related to insanity, the ability to summon pseudonatural creatures, and the power to unleash bolts of pure madness.

Okay, how is it broken? What’s it do that’s so good, power-wise? Normally when you talk about character power, you can usually point to something as a general rule – like you can point to the wizards’ spell list and that’ll explain itself. In Zceryll’s case, what you get when you channel this Vestige is:

Let’s simplify that: You can use Summon Monster (Half Your Level) every five turns at will. DMs may make you spend the action to do it, in out-of-combat ways, but at will summons is incredibly strong, not because you can flood the battlefield, but because summons are combat capable creatures that in many cases can cast spells. So every utility power available to any monster on the summon list is available to you, but in a spooky way. Need something big moved? Summon something big and stronk. Need to get out of a cage? Summon something that can move through walls. Need to wreck shop on the battlefield? Well at every tier, there’s a piece of cannonfodder you can dump on the battlefield and then not have to spend actions commanding. If your summon runs out of healing magic, you can just summon another one and get it to do the healing magic. If your summon is beat up, you can summon another one and get that to replace the other. It is one of the most startlingly effective spell families to have at-will access to, and the only real drawback for the Binder is that it’s a bit slow.

The actual theme of Zceryll is a weird one, and it bums me out a little that the Binder is a class ostensibly built around this variety of flavour choices, when every powerful Binder is going to be hard on Zceryll and the skills required to be good at managing Zceryll. It’s also frustrating because the name Zceryll is a person’s name first; the odd, hard to express mangled language of the name isn’t a language from outside reality – it’s someone’s name, a weird name, but it’s just… a weird name. It speaks of a culture that’s not common to you now, but Zceryll is still just a person, it’s not an extrusion of a reality where they don’t have vowel sounds.

I feel this is a dropped ball with Zceryll. At its root, it wants to be Lovecraftian; the powers are from the far realms, it’s about a refugee of our reality trying hard to get back in, it’s got this sort of lurking threat to it, and it shows you tearing reality open and letting in things that look like stuff you already know but which are definitely not, while you cast literal bolts of madness from your hand... and then disappointingly, it’s just… a wizard, like you, who drank of the outside.

My advice, if you’re going to use Zceryll in your game worlds? Soak in the eerie. Don’t say it was a wizard who started out researching the far realm. Make Zceryll something not someone.