When you sit down to play a game with your friends, you are ultimately looking to have an experience. That experience can be built around so many feelings, so many ideas, and it is just as valid an experience to seek out the tension and catharsis of a horror scenario as any other. The horror campaign, the macabre fantasy, the tangle of feelings you get when you find yourself pressed in the thorns and consider how much you’d give to just escape, even if it means leaving behind a little of your soul – this is absolutely something you can do in tabletop games.

It’s not even at odds with Dungeons & Dragons’ vision of heroic fantasy, which we can argue about, or wait, no, we can’t argue about it, because I find having to define the narrative parameters of a heroic fantasy or really deal with people who want to try and define the ‘genre’ of a game that’s as broad and flexible as D&D to be a task more akin to pulling teeth than having fun. Accept then that it is entirely possible to run a horror game using Dungeons & Dragons, because even if it’s not to your standards of horror doesn’t mean it doesn’t deserve to wear the genre label.

And Wizards of The Coast recognised it too, releasing the 2005 supplement for D&D3.5, Heroes Of Horror. 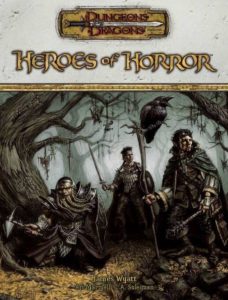 This book is, let’s say it reaches the lofty purchase of fine, I guess. I’m not wild about the content it offers (in no small part because my players have been horrified by things I made without any such guidance), but I’m also not against what it’s doing for the most part. Particularly nice is that the book contains an attempt to discuss player boundaries and emotional needs, even if it’s a very surface, a very 2005 discussion of those boundaries. I was going to give this book a treatment, only to find I already did a thread on it, and then saw how that thread kind of cooked away into just making fun of one thing in the book.

Even while the book is a thorough examination of a theme space, it’s not all one way of looking at it. There’s talk about player options, about how to handle ideas of tainted powers, kind of a Moorecocky thing. There’s some monsters meant to be more horrifying, there’s some discussion about the use of the inexorable, about the notion of the destruction or opposition of hope itself as component of horror. There’s also some horror scenarios, which I’ll admit I don’t find very engaging because they start at ‘murder clown mind-controlling orphans,’ and I don’t really need any kind of special rules to treat clowns as kill-on-sight targets in games. They’re up there with viziers.

Nonetheless, this is a 3.5 book and what that means is at least somewhere, you’re going to find a big list. In this, the list is a gigantic, 100 entry list of what it calls Creepy Effects. These are meant to be things you can dot into the game to give players a feeling of something unsettling being afoot.

There are three problems with this list. The first is the kinda fucked-up time issue; some of the list’s things can be singular moments, abrupt and dramatic arrests in the vision they have of normal – all the wildlife in an area falling silent to no effect, for example. Some of them are long-term problems, like fiding a persistent object you were sure you disposed of. These events aren’t really comparable – one is best when it comes out of nowhere, the other requires regular poking and prodding to make a repeated effect.

The second problem with the list is how many of these ‘creepy’ things are in fact very ordinary. One creepy happening is meeting a person who has a voice like an adult, but are as tall as a child. That is to say, meeting somone short. Another is a player hears something that none of the other players hear, which is a really common real-world experience, not to mention hearing voices or smelling smells nobody else notices. I get it, it’s horrifying to experience those things if you’ve never had to deal with doubting your own perceptions, but for people who have experienced that, it’s just kinda a reminder of how precious the writer must be. There’s also a bonus point here: in a world where there are Sending spells and Psionics, how is it weird to hear a voice? The real trick is trying to work out who sent the messages.

Finally, the third problem is this table ends on the entry: One Word: Fog, which made me laugh so hard it broke all chance this game had to ever act like it was going to lead to spooky games ever again.