Well, no, they make a lot of sense, and they’re really obvious as a play ramp, but if you try to think about how to do them better you wind up at this super weird place.

I’ve been leafing through the Monster Manual 2 this morning (and eagle-eyed tweeter followers will be able to see how far ahead I’ve worked on this one), and thinking at first about obvious problems the book has, then how I would fix them, and, because I’ve been listening to Robert Miles talking about Artificial Intelligence, I then started to think about what unintended consequences that may result.

First of all, one of my thoughts was the question why did I buy this book? When Monster Manual 2 came out, I wasn’t exactly flush with cash – I always need to do a lot to convince myself that I want to buy something worth more than say, ten dollars, so this book being in my collection meant it represented some kind of value I expected to get out of it – stuff I wanted as a DM (because I was running games) and stuff I wanted as a player (because I was playing games). 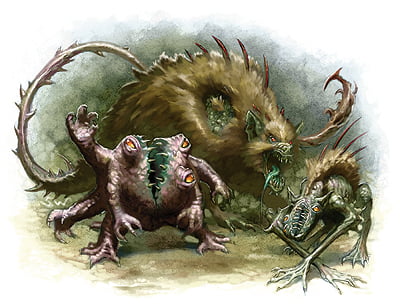 Splatbooks were often cheaper, so they were an easier thing to bring myself to purchase, and the mixed bag books like Book of Exalted Deeds was a little bit easier Which is weird, because Monster Manuals are really not that useful for non-DM play tools… or so it seems when you leaf through the book. But surprise, this is third edition D&D, where there’s no deliberate coherence to the way these books get written, thanks to the non-DM player facing abilities Polymorph and Wild Shape.

The Monster Manual has Dire Animals in it, which are valid shapeshifts for druids who want them, and it had a range of humanoids who you could be polymorphed into, most notably the Firbolg, a very attainable big huge person form which could wield weapons and had a high strength score. There were also some sneaky tricks in the form of subtypes – I’ve talked in the past about how ‘water’ was a tricky thing to put on creatures because suddenly those creatures could be put under the thumb of a water domain cleric.

Cheekier still, though, there were some outsiders, a creature type that’s used to represent demons and extraplanar beings that don’t have a material existence that works the way ours do. Demons, angels, the things that are demon-y and angel-y, that kinda thing. Anyway, if you wanted to change shape with polymorph stuff, there were type boundaries; if you had a body made of meat, like you were a beast or humanoid, you couldn’t polymorph into an elemental. But if you were an elemental, you could polymorph into any other elemental. Outsiders could polymorph into any other outsider, and if you took the Improved Familiar feat, if you were a wizard, your familiar could be an outsider, and its hit dice would be your hit dice.

Which meant for a feat, at level 12, you could spend a single spell slot to turn your garbage imp into a Kelvezu, a creature with a strength of 20 and an AC of 35, which is a lot of meat shielding to have on the battlefield for that little expenditure. 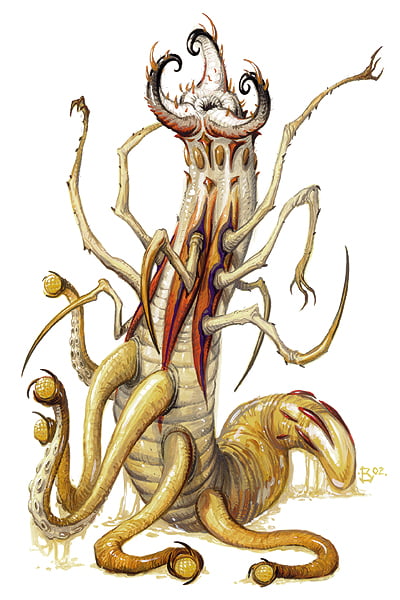 Okay, so Monster Manual 2 had a bunch of things that were useful for DMs and non-DMs, but the latter category was probably broken and really only rewarded nerds like me who pored through those books looking for broken things. It was kind of a symptom of one of the problems in 3.5, where there were just so many options for players to exploit and these weren’t even necessarily broken enough to get into a rules fight over.

The thing that strikes me now reading the book though is how incredibly untidy it is. In 4th edition, the monster manuals are positively beautifully laid out (in my opinion); monsters are divided up into small groupings, with similar, shared types that you can pick together in a similar level range to use together to construct an encounter reasonably quickly. You look up Duergar and you get four or five types of Duergar, with a small number of useful mechanics in common and a reasonably coherent theme, descriptions of how they work and how to make them scarier.

This book however is a cross-referencing nightmare. There’s a section at the start explaining a whole range of given hard rules for creature types that are in many cases non-obvious – outsiders, for example, are proficient with all martial weapons. Why? Because they often depicted them with swords and they didn’t want to leave a rules hole where monsters were depicted fighting with weapons with which they weren’t proficient. A lot of rules were created with the idea that players and monsters exist on the same ruleset, and then you had rules that further ensnared them. That’s why Wild Shape’s power is hidden in a monster manual, why polymorph got more powerful with every new book published, and ultimately, why polymorph got kicked in the neck during 3.5. 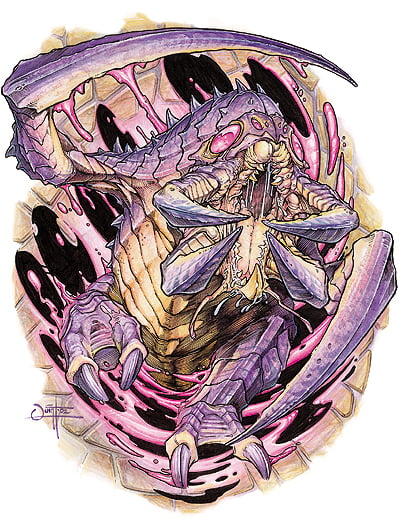 Monsters come with rules for the kind of  groups and formations they have in single combat encounters – but they often reference monsters in other parts of the book (annoying) or other books (really annoying) or monsters you have to create yourself with levels and stuff (really fricking annoying). Advancing monsters involves taking new feats, and that means checking their ECL, and that isn’t even in this book either, good fricking grief. It’s also just kinda weird when you sort the monsters by general alphabetical order. Some monsters, like the Abeil, are all put in a group – here are a handful of Abeil, with their wildly different challenge ratings

and oh boy, Challenge ratings are bullshit we’ll get onto that another time

but then you flip over a page and you get page upon page with all these monsters with really different types of origin or application. Ethereal Dopplegangers and Ethereal Slayers live on the same spread of pages, but one of them is a spooky ethereal version of an existing monster and the other is a great big fucking murder bug. What’s more, undead! Undead is this enormous umbrella type and a bunch of the undead have these sort of vague stories about how they came to be but they for the most part are all folded under the heading of ‘a wizard did it’ while still having some inexplicable unified purpose.

That’s part of what’s so missing about this book. Treating it as an actual guide to creatures that exist in the world – as the needlessly picky rules imply – makes sense for its awful guidance on things like interconnected groups or the effort involved in turning these things into encounters. But treating it as game entities designed for convenient browsing by a DM looking for threats also doesn’t work because you still have to rifle around through a dozen books doing research to build a basic encounter!

It’s an example of how 3rd edition was close to what it wanted to be. It wanted to be an overhaul of 2nd edition that gave players tools and used unified rulesets to make DMing easier rather than cross-referency hell, but it also wanted to pay fealty to previous editions’ weird mythology and monster concept space as well. In the end, what you got was this mutant half-child thing, where the book is doing a dozen things, and none of them are done conveniently for actual players to meaningfully interact with. The fun is here, but it needs to be extracted.