Australia has a really unpleasantly comfortable relationship with reality TV.

I understand that just because I dislike reality TV doesn’t mean it’s an inherently unworthy media form, but I think that Reality TV’s relationship to Australian culture can be seen as a symptom, because its a kind of illness. There’s a lot of shows we could be making that we’re definitely, definitely not making, because it’s cheaper to make reality TV shows, and that means our entire TV model is biased towards making these cheap shows and trying hard as possible to drive engagement with them, and seemingly because of our national character perhaps, we drive these engagements with the most awful, antisocial kind of stuff. The reality TV show is something that we’ve been doing for my whole life, more or less, in the controlled space of the lifestyle and vet program, leading around the prolonged misery dare of The Block and House From Hell, or the pseudovoyeuristic ‘game show’ of observing assholes with Big Brother or the ‘documentary’ of rich people problems like Sylvania Waters, and, of course, the utterly empty promises of reality TV in the form of the talent show.

There’s an industry pumping these things out; for a brief time there I thought it was worth my time to keep some framing in my mind to tell which ones came from England and America and Canada and also the ones from Australia, because these shows were made by a business that then outsources them, then the resultant products are merchandised across all the countries that speak the language and for some reason we here in Australia have a remarkably deep desire for these shows.

And I remember a first one. 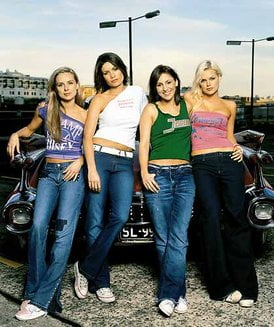 It wasn’t necessarily the first. I don’t know. I don’t care. We’re getting to a very specific place, just bear with me. See, Australia had this reality TV show back in the 90s, called Popstars. An idea that started in New Zealand, proving that not everything they did is better than we do, Popstars is your basic formula talent show. Information about it in hindsight is scarce: I seem to remember that it was about building a pop group out of a variety of participants, rather than any one person winning.

Popstars was participated in by a bunch of people nobody remembers, and it was staffed by a bunch of other people nobody remembers. I literally only have had this show held in my memory by TISM making fun of it, referring to a choreographer as ‘that bloke from Popstars that looks likes the Paddlepop Lion and who you could tell was so enjoying his chance to bully a bunch of twenty year olds,’ and if that song, BFW, didn’t have its own timelessness to it, I would have absolutely forgotten Popstars.

Well, except for one thing.

Popstars had a ‘winner,’ of a sort, there was something that came out the other end of its extrusion, a bubblegum pop girl band called Bardot. Bardot had one album, also called Bardot. They are eminently forgettable; I cannot tell you how their song sounded, nor how well their album did. I thought at first they were a complete stone dropped off a cliff, a complete nothing of a band, but no, it turns out they had a ‘successful’ album and a ‘successful’ follow-up album. They dissolved in 2002, to pursue solo careers, which based on subsequent releases, they immediately caught, then went home. Popstars continued for a few more years, tried to make a few more bands (like ‘Scandal’us‘), and was eventually outmoded and displaced by Idol, which it directly inspired.

Now, there are two reasons to remember Bardot.

The first reason to know about Bardot is that Bardot had two number one hits in Australia, that not even Australians of age at the time remember, was nominated for ARIA awards, and lost to Savage Garden (because we live in a society). Despite this, you can’t get them on Spotify. You can’t find them on any online streaming service, at all. You can’t buy them on iTunes. And this is because the licenser responsible for owning all their music has declared that it wouldn’t make enough money to make it worth doing.

They own the music.

They don’t need to pay anyone royalties.

They are saying that it wouldn’t make them enough money to do the paperwork required to stream these songs.

Anyway, here’s the other thing about Bardot that’s worth remembering. You might imagine so far that this being a bubblegum pop band created in a public television program to manufacture a band there’d be some criticism of the band as being ‘fake’ in some way. Artificial. Also, the selection of performers was a range of Photogenically Attractive Skinny White Girls, which furthers the comparison to mannequins or dolls.

The people making the album took this criticism on board, then and what we got was this album cover. 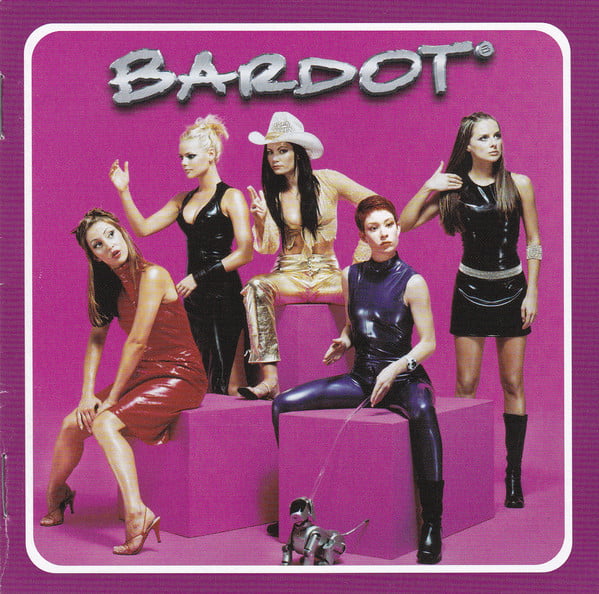 It’s clear the aim is to riff on the criticism – ha ha, let’s present them as mannequins, as plastic dolls in plastic clothes, suggesting we can tell that people think of this as a ‘fake’ band!  That’s you know, so far so what, and hey, look, they’re people who make media involving women that treats them as objects, this isn’t news or meaningful. That’s not really the thing about this cover that’s bugged me. Though I guess at the same time, boy, I bet there are a lot of people who had their bimbofication or dollification kinks awakened here.

No, what’s haunted me about this album cover for decades is that this is a professionally made album cover, made by people who were ostensibly professionals, and they didn’t think to look at the transparent plastic ‘lead’ they gave the model in the front right to hold to connect her to her ‘dog’ that is, yes, ha ha, artificial. Because the way it’s positioned, the way it’s plastic, the way her hand isn’t tangibly holding anything – it absolutely looks like she’s peeing on it.