Time to time Jesus comes up on the timeline and I watch as people who are generally well-meaning people try to harmonise together the Bible and the oppressive behaviour of Christian hegemony. There’s usually some sort of deference to a Gandhi quote, some sort of next-levelling smugness of well Jesus was great, Christians are bad. Maybe you’ll see something like Jesus was a leftist or Jesus was an ally or a truly amazing take Jesus was more of a trans person and on the one hand I try to file that under ‘fanfiction’ but then people use it to discuss real world political behaviour of a culture that has probably a third of the world’s resources and is using them to kill people.

It’s basically an attempt to make Christians feel ‘not so bad’ about being part of a great big dreadful machine, which is not something I see typically extended to things like heterosexuality or cisgenderness.

It annoys me, personally, because Jesus isn’t a cool guy who’s being mangled by his followers.

Jesus is a total dick and his teachings are full of confused morals and justifications for evil. The only reason people treat him like he’s good is because we treat his story as if he’s meant to be good and interpret his positions that way. There’s a constant decontextualisation of Jesus – that’s what Sermons are for! – that turn his positions into whatever we need them to be, and want to pointedly make sure you don’t relate what he said today to what he said yesterday, because if you do, you might go ‘hang on a second, fuck you Jesus.’

For example, the story of the Widow’s Mite. Now for the purpose of this consideration we’re going to treat Jesus like he existed and did the things that are kind of fundamentally necessary to the Christian narrative of Jesus. He didn’t, and he didn’t, but let’s just pretend for now. Treating this text as a text. 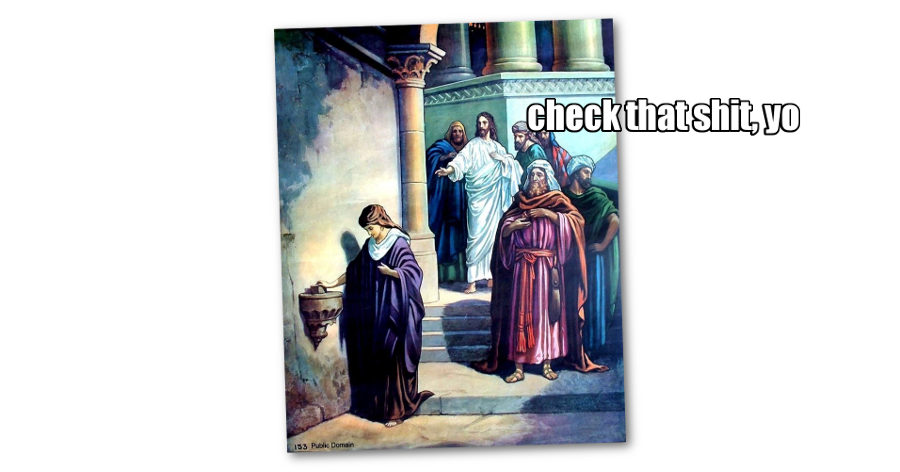 The story, which appears in Mark (the first draft) and Luke (the second last draft), tells of a time when Jesus and his disciples were rubbernecking in the temple and watching people do their weekly donations to the temple’s upkeep. Rich people came in and dumped large amounts of cash, and a poor widow came in and gave a ‘mite’ – one of the smallest currencies they could give. Jesus turns to his disciples and says:

3 And he said, Of a truth I say unto you, that this poor widow hath cast in more than they all:

4 For all these have of their abundance cast in unto the offerings of God: but she of her penury hath cast in all the living that she had.

Then we nod and tap our chins and we move on to the sandwiches and coffee after church.

Now think about this in the context of the fact that Jesus is meant to be the perfect human sacrifice that redeems us our sins. Remember that Jesus is God in this interpretation of the faith, that he talks to and experiences the voice of God, and that he is aware of God’s plan.

When Jesus submitted himself to torture and death, that was a bad weekend out of an infinite life and he knew he was going to survive this. We’re told it’s an important, meaningful sacrifice, it’s meant to be the ultimate sacrifice, but in this case, Jesus is the wealthy, giving a meaningless fraction of his wealth (time), and it wasn’t going to bother him a week later. It was performative, it was literally done so he could show off to people millenia later for whom he had done nothing.

If it costs you nothing, Jesus, what does it mean that you’re giving it up?